In its July 2010 Financial Stability Report, the Bank of Greece showed continued stress on the Greek banking sector. The Bank’s financial stress index, which is based on variables such as “such as share prices, CDS spreads, interest rates, bank profitability and capital adequacy, etc.,” was at its highest levels in Q2 2010 (here). A look at some specific numbers reinforces the negative image for Greek banks.

Begin with non-performing loans (NPLs). These had trended downward and reached a trough in 2007. Since then, however, there has been a sharp increase in their occurrence. In Q1 2010, 8.2% of loans were deemed non-performing, up from 5% at the end of 2008. NPLs, moreover, come from all sectors with consumer loans leading the way in terms of deterioration (up to 13.4%), followed by business and then housing loans. 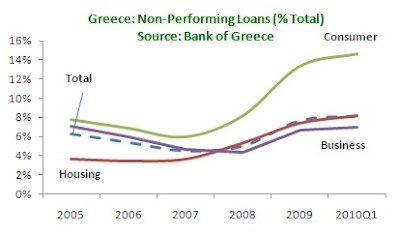 Even if you look at an extreme measure – write offs and write downs – banks wrote off €917 million from January to July 2010. This is double the amount they wrote off in the same seven months of 2008 (€441 million) and 37% higher than the same amount in 2009 (€665 million). Given that banks adopt various measures to avoid a loan being classified as non-performing, it is clear that households in particular are having trouble meeting their obligations.

Greek banks are also facing a mini run with rising capital flight. There has been a noticeable drop since December 2009 in the deposits of corporations and households. A monthly reduction in deposits to the tune of €3.6 bn has produced a cumulative drop of 10.8% (€25.7 bn) between December 2009 and July 2010. The main driver is the drop in household deposits by 9.6%, while the decline in the deposits of non-financial corporations is more pronounced from a relative point of view, having contracted 18.5%. 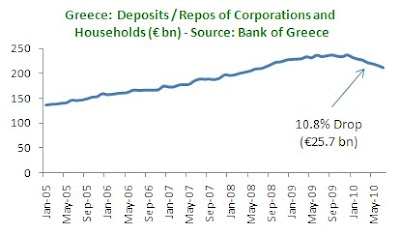 The net result is a contraction in credit growth. The amount of credit outstanding in the economy has been growing very slowly since Q4 2008. To put some numbers in context, the total amount of credit outstanding was just 4.3% higher in July 2010 versus January 2009. By contrast, from 2001 to 2008, the annual increases in credit were averaged between 15% and 20%. Further, the Bank of Greece shows a continued contraction in credit growth (at 2% in July 2010 versus 4.2% in December 2009), although the total amount outstanding has made a modest rebound in June and July 2010. 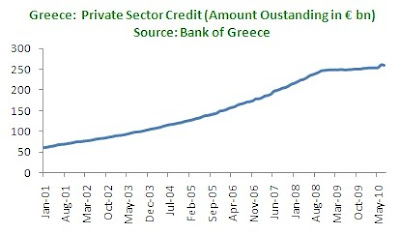 All this paints a particularly grim picture for the banking sector and, more importantly, for the real economy. Non-performing loans demonstrate the stress under which households and companies are operating, while the reduction in deposits suggests increasing anxiety by residents about the security of their money. And the contraction in credit amplifies these trends by starving the market from funds necessary to make transactions.
Posted by Nikos Tsafos