Greece has run persistent current account deficits for the past thirty years, but there is a debate about whether these really matter. George Alogoskoufis, Greece's finance minister, claims that these are not a big deal - in his book "Greece After the Crisis" he says that these deficits merely reflected the faith that foreign investors placed on the Greek economy. Costas Simitis, former prime minister, thinks differently: for him, Greece is importing more goods and services because there are no domestic alternatives that can compete on price or quality.

In a sense, Mr. Alogoskoufis is right. But he is right insofar as his point is a tautology: when a country imports more than it exports, it is borrowing from abroad. That a country can borrow is a signal of faith. So what the finance minister has said is trivial, although what he *means* to say is this: if borrowing was supply driven (money flowing into Greece for good returns) rather than demand driven (over-consumption and under-saving leading to borrowing) then no need to worry. But if this net inflow was driven by (a) lack of ability to grow exports or (b) lack of savings from which to finance investment, then the implications are worrisome.

Before assessing the two competing viewpoints, some basic numbers are useful. The first graph below shows the deterioration in the current account that basically started after 2004. The main driver of that deterioration was clearly the increase in imports while most other variables remained relatively flat. 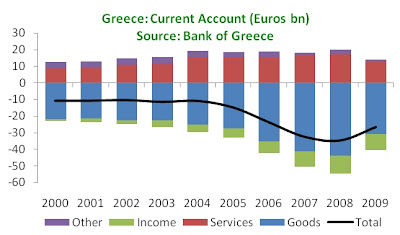 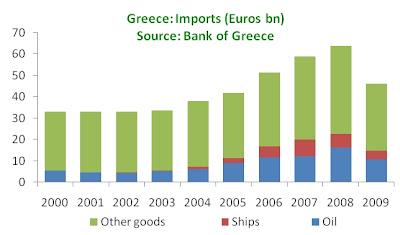 How was this current account deficit financed? Clearly, it was not financed by foreign direct investment, which would signal a true "faith" in the long-term prospects of the Greek economy. Net FDI was almost zero this past decade. It was clearly financed by portfolio investment (in equities), but this variable did not grow enough between 2004 and 2008 to explain the growth in the current account. So one cannot even argue that growth in the Greek stock market produced an inflow of funds into Greece which created a current account deficit. This leaves most of the financing - especially from 2005 to 2008 to "other investment." This is an expansive category but it consists mostly of advances and loans. Hardly the stuff which shows much faith in the Greek economy. 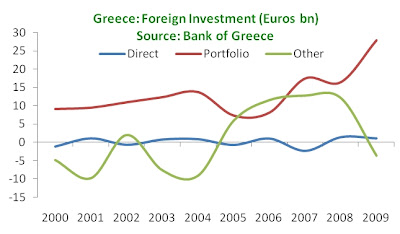 There is one final way to look at the data. The Bank of Greece just published a volume on Greece's external position. It is a long text (and I am still reading and digesting it), but from the start it provides evidence that Greece's rising current account deficits were demand, rather than supply driven. This graph below best encapsulated the issue. 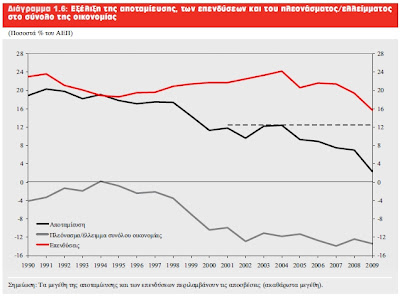 Looking at the period since Greece's entry into the eurozone, it dissects the current account deficit by looking at the borrowing needs of the government and the private sector. In terms of investment (the red line for those who do not read Greek), it remained more or less stable in the 2000s, although one can detect two sub-periods before and after 2004. Higher investment was obviously not a reason for a net inflow of money.

Savings meanwhile experienced a near collapse (in black). Granted this started before the entry into the euro, but it accelerated after 1999. What entry into euro did, among other things, is lead to an overly expansionist monetary policy since Greece's higher than average inflation meant that real interests (set centrally by the ECB for all the eurozone) were too low for Greece. The dissaving was split between the private and public sectors.

Putting all this information together, then, paints a very specific picture for Greece's current account: imports, in part driven by oil and ships but also for other goods, rose from 2004 to 2008, while exports failed to keep up. There was a corresponding net inflow which was financed by loans rather than direct or portfolio investment. And this inflow was necessary between households and the government were not saving enough to finance investment.
Posted by Nikos Tsafos