Focus on Unemployment: Does Education Help?

As the Greek economy contracts, unemployment has risen from a low of 6.6% in May 2008 to a high of 12.1% in February 2010. But this overall figure masks several important sub-trends. In the fourth of a series of posts on unemployment, I look at the statistics by education level and what they tell us about Greece’s ability to find employment for people with different educational levels.
The first chart shows the unemployment rate for groups based on their education relative to the national average. So if the national unemployment rate is 10% and the unemployment rate for university graduates is 5%, the number would -50%, meaning a university graduate is half as likely as the average person to face unemployment. I have also added an error bar with the standard deviation to show the range around this single point estimate. The wider the standard deviation the more volatility there is around the singly number shown here. 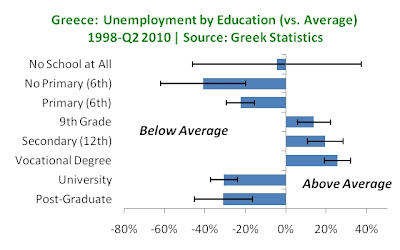 It is worth pointing out here the standard deviation on the two extremes. For those with no schooling at all, unemployment rates have gone through two periods: from 1998 to 2003, people in this group were 35% less likely to face unemployment versus the national average. In fact, there were times in early 2003, when the unemployment rate in this group was below 2% versus a national average of 9-10%. After 2004, however, it is a completely different story with people in this group facing a 24% higher chance of unemployment. And this number becomes greater as we move towards 2009 and 2010, where the differential is as high as 54%, indicating that those without (much) education are hardest hit by the current economic downturn.
On the other extreme, the volatility is harder to explain. The unemployment rate for those with post-graduate degrees is seasonally volatile: on average, the unemployment rate in Q2 and Q3 of any given year is 1.1 percentage points higher than it is on Q1 of the same year and Q4 of the previous year. This is a systematic observation that occurs almost every year. As far as I can tell, there is no obvious explanation for this – one hypothesis I had, which is that the labor force increases as people get their degrees but haven’t found jobs, is not borne by the data. Let’s retain this as a puzzle to return to at some point.
In certain ways, these overall numbers are predictable, so it is always useful to put them in a European context. Greece had an average unemployment rate of 9.5% in 2009 versus an EU average of 8.9. Looking at education levels, however, reveals a much different picture: for university graduates, the unemployment rate in Greece is 6.6% versus a European figure of 4.5%. In other words, someone with a university degree is 47% more likely to be unemployed in Greece than in Europe as a whole. 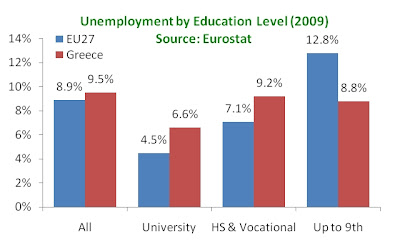 For those with a high school diploma and vocational degrees, the differential is still substantial but narrower: in Greece there is a 30% greater chance of unemployment. For people with an educational level below 9th grade, however, the chance of unemployment is lower in Greece than in other European countries, which can in part be explained by seasonal employment during the summer months.
Posted by Nikos Tsafos