Focus on Unemployment: Integrating the Young

As the Greek economy contracts, unemployment has risen from a low of 6.6% in May 2008 to a high of 12.1% in February 2010. But this overall figure masks several important sub-trends. In the first of a series of posts on unemployment, I look at the statistics by age and what they reveal about Greece’s ability to absorb younger workers into the work force. 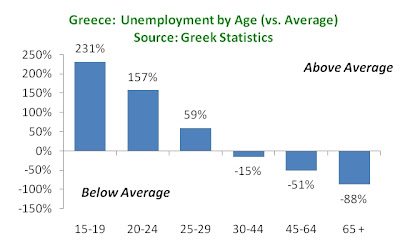 The question to ask is: at what point does the age-specific unemployment converge with the national rate? This is the same thing as asking: at what age is an employee integrated into the workforce so that employment status is no longer influenced by age. From the graph, it looks like that number is somewhere above 30 years (the data is too aggregated to pinpoint this more precisely). Given that the 25-29 differential is 60% and the 30-44 differential is -15%, the turning point is probably closer to 35 years.

To put this in context, I have added a note on where the values are for the United States. First of all, the graph shows that the United States faces a similar link between age and relative unemployment, which is to be expected. But the age at which workers are absorbed in the United States is much lower. 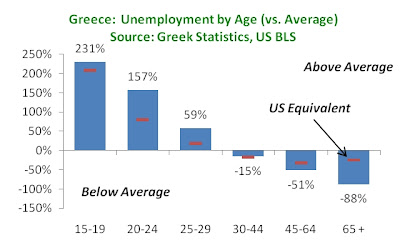 At the below-20 age group, the relative unemployment differential is very similar between Greece and the United States (for the US, this group refers to ages 16 to 19, not 15 to 19). In the 20 to 24 age group, the difference between the two countries becomes much greater, however: 80% for the United States versus 157% for Greece. By the time we get to the 25-29 group, the number for the United States is 18% versus 59% for Greece. In other words, a worker aged 25 to 29 is only slightly more likely to be unemployed than the average American, whereas in Greece, that chance is 59%.
Posted by Nikos Tsafos