As the Greek economy contracts, unemployment has risen from a low of 6.6% in May 2008 to a high of 12.1% in February 2010. But this overall figure masks several important sub-trends. In the fifth of a series of posts on unemployment, I look at regional variation in unemployment rate, and in particular, at the challenge of creating permanent employment in the periphery.
Begin with some basic statistics on regional employment. Compared to the national average unemployment rate, there is significant variation: people in Crete are on average 24% less likely than the average person in Greece to be unemployed. On the other extreme, people in Western Macedonia are 48% more likely to be unemployed. Interestingly, Attica, which includes the greater Athens region, is below the national average but by a mere 5%. 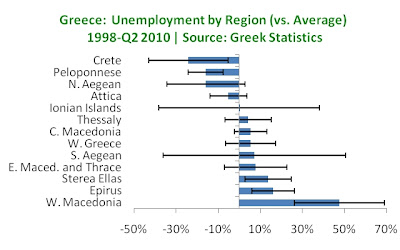 As always, these single-point estimates mask significant variation, so I have added to the graph the standard deviation of the differential between the regional and the national rate. Two sets of regions, in particular, stand out: the islands and Western Macedonia. 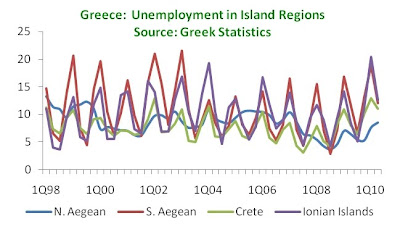 Western Macedonia is a trickier story. For one, the region has the highest unemployment rate of any other in the country consistently since 1999; the high volatility, therefore, can be understood in the context of a progressively worsening employment picture, when, at times, a person in Western Macedonia is almost twice as likely to be unemployed as the average person in Greece. This is the only region in Greece which is landlocked and it is also the smallest – by population – on Continental Greece. How these facts impact unemployment is hard say in an easy way however, so let me add this also to my list of unexplained puzzles for now. 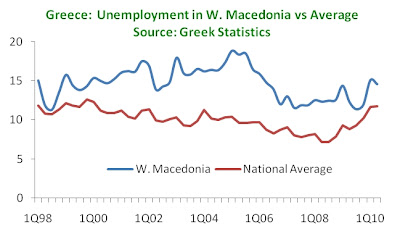 Overall, what these number show is that there is significant variation in employment and that the problem is most acute in Continental Greece, which lacks the seasonal boost enjoyed by the islands. Besides Attica and the Peloponnese, all regions in continental Greece face a consistently higher unemployment than the national average.