Focus on Unemployment: Women in the Workforce

As the Greek economy contracts, unemployment has risen from a low of 6.6% in May 2008 to a high of 12.1% in February 2010. But this overall figure masks several important sub-trends. In the third of a series of posts on unemployment, I look at female participation rates and the relative unemployment of women versus men. 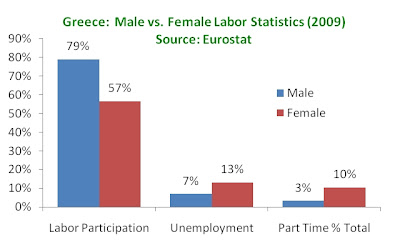 This improvement is substantial, but it still lags European trends. At 64.3%, female labor participation in the European Union in 2009 was much above the Greek rate. And while females in Greece narrowed the gap versus the European average in the early 1990s (from 14 percentage points difference in 1992 to 9 points in 2000), since 2000 it has remained the same, which means that increases in labor participation are similar in Europe as they are in Greece (no convergence or divergence).

Relative to all of Europe, however, Greece is ranked anywhere from 23rd to 25th in the last decade (in 27). In any given year, therefore, there are only two to four countries where female labor participation in lower than it is in Greece. In fact, in 2009, Greece was 25th when it came to the difference in labor participation between females and males – meaning that in Greece females were less likely than males to be in labor force than in any other European country except two (Italy and Malta).

The numbers on female unemployment are worse both in absolute as well as relative terms. In 2009, a female in the Greek labor force was almost twice as likely as a male to be unemployed (91% more likely to be exact). This was, by a wide margin, the highest number in Europe (in second place, Italy had a 37% ratio). If we look at a broader time sample, from 2000 to 2009, Greece retains its position as number one in Europe (at 133% more likely), but the gap with second place Spain is smaller (172%). A woman in Greece is more likely to be unemployed relative to a man than in any other country in Europe.

One aspect of the female unemployment problem is the lack of part-time employment: in 2009, only 10% of employed females were employed part time. This number is much below the European Union average of 31.5% and it puts Greece at the bottom of the EU scale on that issue (ranking anywhere from 23rd to 26th over the last decade). So while in the rest of Europe, part time employment is an important part of the overall labor force story, it is not so in Greece.
Posted by Nikos Tsafos