In its first review of Greece’s performance, the International Monetary Fund praised Greece, saying that “the program has made a strong start.” Looking at the revised numbers, there are several changes worth noting. 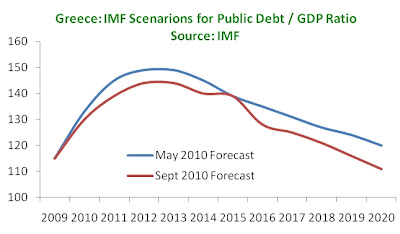 Two variables have really changed in the IMF’s outlook: inflation and the current account. Let me focus on inflation here since that is the variable that most explains the change in debt as higher than anticipated inflation – of which I have written before – has helped shrink the real debt burden. While the IMF previously expected inflation in 2010 to average 1.2%, with the country slipping into deflation of -0.5% in 2011, the Fund now forecasts 3.5% inflation in 20210 and 1.3% in 2011. No more deflation.

Since I noted before that this rising inflation was likely due to price hikes from tax increases, it is worth pointing that the IMF’s estimates that, “Inflation at constant taxes is falling and has declined below the euro-area average for the first time since the creation of the euro.” This is a major development, especially when one considers that (a) price adjustment is necessary to restore external competitiveness and (b) that domestic product market reforms have yet to start, which means they have yet to exert their expected downward pressure on prices.

Alongside these positive changes, however, comes also a negative one: contingent liabilities. These are liabilities that the Greek state may be responsible for. In its May 2010 analysis, the IMF estimated about €25.8 bn (11% of GDP) in contingent liabilities from the “debts of public enterprises and identified guarantees to the public sector.” This has now grown to over €85.5 bn due to “past swap operations of €5 billion [and] the state-guaranteed liquidity support of the ECB to the financial system of €55 billion.” If the state had to assume these debts, its debt-to-GDP ratio would peak at 191% of GDP in 2014. Minimizing these debts – which requires baking stability and the orderly re-organization of the public enterprises – is a central to Greece’s ability to remain on the baseline debt-over-GDP path.
Posted by Nikos Tsafos