My reaction to the recent deal signed between Greece and Qatar is this: what are people thinking? Not the Qatari or Greek government, but the press and the analysts; how come no one can do a basic reality check on this deal?
Here is what I mean. Parties sign memorandum of understandings (MOU) all the time. Too often in fact. If two parties meet and do not sign an MOU, there is no future. But an MOU is akin to, “I like what I hear, keep in touch.” The numbers quoted are usually back of the envelope calculations. Most MOUs just lead to more MOUs to keep discussions open. An MOU says little about whether any investment will happen.
So what to make of the supposed $5 bn that Qatar will invest in Greece? For the Greeks, the case for enthusiasm is clear. Not only does this move signal faith in the Greek economy, but the sums are huge: from 2000 to 2009, the Greek economy absorbed ~$2.2 bn annually in foreign direct investment (FDI). So $5 bn is a big number. But is it too much? How can a country whose absorption capacity is $2.2 bn a year absorb $5 bn? Hold that thought. 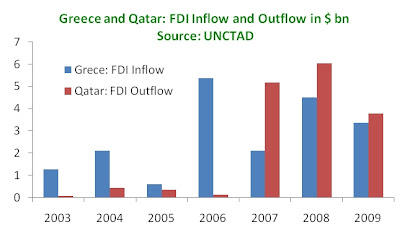 Now look at the Qatari side. The Qataris have lots of money, no doubt about that. But over the last three years and they have invested an annual average of ~$5 bn abroad. So this proposed investment in Greece would equal the amount of money that Qatar spends annually everywhere the world. In fact, if Qatar invested $5 bn in Greece in 2010 (obviously not going to happen), then 25% of Qatar’s stock of investment would be located in Greece (Qatar’s stock of FDI was $16 bn at year-end 2009).

So the thing to say about the Qatari-Greece deal is not, “Yes, we have been saved” or “Oh no, we are selling everything to the Qataris,” but rather, “I like what I hear, but say more.” These are big sums for sender and receiver alike and anyone who takes away only that Qatar is ready to invest $5 bn in Greece gets excited too easily.
Posted by Nikos Tsafos