As parliament passed a bill on trucking reform, I wanted to mull over some numbers on Greece’s transport mess.

Begin with a macro comment, and the fact that Greece’s freight transport is the most dependent on roads. In Europe, 76.4% of freight transport is conducted via roads, 17.8% via rail and 5.9% through inland waterways. In Greece, by contrast, 97.3% of the transportation happens on road, which puts Greece in fourth place in Europe, behind only island countries (Malta, Cyprus, and Ireland). So Greece has a very low share of rail transport for freight and a heavier dependence on roads than other European countries.

A simple explanation is regulation. The graph below shows the latest numbers by the OECD on product market regulation for energy, transport and communications. This index captures the extent to which regulation favors competition, and it ranges from 0 to 6, with six being most restrictive. 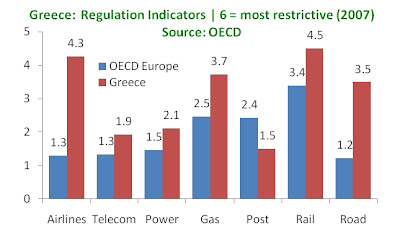 Several items are apparent from this data. First, Greece has more restrictive regulation (i.e. more anti-competitive) than its European peers in every sector except postal services. In fact, Greece’s score is on average 3.1 versus a European 1.9. Second, Greece’s most restrictive practices are, in order, rail, airlines, gas and road services. For road and airline services, Greece has the most restrictive practices in Europe; for gas, it ranks second, and for rail fourth.

Delving more deeply into the trucking sector is a bit hard to do because there is little available data, and so there is limited ability to make comparisons with other countries. I wanted to touch on two main issues, however.

The first is growth. The IMF has noted that, “No new licenses have been sold since the 1970s,” which is a statement that I cannot reconcile with the trucking fleet data reported by the Greek Statistical Agency. In 2009, according to the Agency, there were 1.3 million trucks in Greece (a number that seems exceedingly high, by the way, and which must take a pretty expansive view of the word “truck”).

But looking at fleet growth, one can see the relative rise in passenger vehicles and motorcycles versus trucks and busses – the former capturing private use and the latter business purposes. Relative to 1985, there were in 2009 eight times as many motorcycles on Greek streets and three times as many cars. By contrast, there were only twice as many trucks and just 42% more buses. These numbers suggest that there has been relatively little growth in business transport relative to private transport. 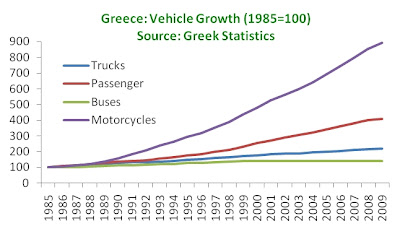 The second is profitability. Again, the IMF noted that regulation lead to “high-price, low-quality transportation services … and large private rents accruing to incumbents.” Estimating this on a macro level is hard. But the Greek statistical agency does report some figures, including profitability, for transport enterprises. Between 1999 and 2007, the gross operating surplus of the 20-odd thousand trucking companies in Greece was 28%, which is quite healthy. What is also apparent is although there was growth in the fleet, the number of companies has been flat, again suggesting no entrepreneurial push to enter the marker. I realize that without a meaningful international comparison, it is hard to put these numbers in context, but I still think they hint towards something troublesome when combined with all the above.
Posted by Nikos Tsafos