The latest data from the Bank of Greece on the banking sector showed some positive news, mainly in the form of a reduction in the capital flight that the country has witnessed in 2010. Between January and July 2010, the deposits of households and corporations were falling by €3.6 bn a month. In total, more than €25.7 bn was either withdrawn or moved out of the country. 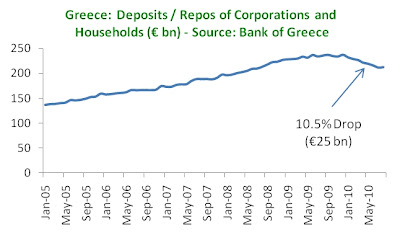 In August, for the first time in 2010, there was a positive change in the deposit number with an addition of €739 million. Looking at what drove that increase shows that it was mainly due to two forces (a) there was a significant increase of €574 million in the non-financial corporate sector; and (b) there was a net increase in the deposits of households of €74 million.

These two sectors, as can be seen in the graph below, have accounted for almost all of the drop in deposits – in fact, they have produced a decline in net deposits despite an offsetting increase in the deposits by insurance companies and the general government. So the fact that both corporations and households are boosting deposits is a welcoming sign. 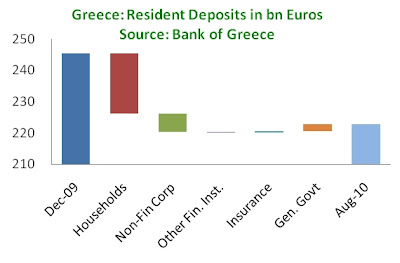 Of course, there is much more than needs to happen before the massive outflow of 2010 is repaired. And perhaps August 2010 proves to be nothing more than a blip. But a positive blip it certainly is.
Posted by Nikos Tsafos