Looking at the short PowerPoint presentation summarizing that 2011 budget, the first thing that comes to mind is, wow, there is a PowerPoint presentation summarizing the 2011 budget! Unlike the past, when information was buried in several-hundred-page long documents, this year the Ministry of Finance has put out a 21-page summary of the main numbers (here). That alone is worth celebrating.

What stands out in the budget is the dependence on an 8.7% increase in revenues to meet the 7% of GDP deficit target. Given the weakness in revenues in 2010, that plan raises some questions about whether this objective is feasible. Lex, at the Financial Times, for instance, writes that, "the state badly needs to accelerate the pace of tax collection" and then, "if Greece is ever going to manage to pay its debt ... the private sector is going to have to start paying its taxes."

These points are true. However, a closer look at the budget shows several important points. First, the state does not expect direct taxes to rise in 2011 due to the recession. In that sense, there is not much dependence on "classic" tax collection, though there is a provision for €700 million from imputed taxes.

There is instead a much greater reliance on indirect taxes, which are forecasted to grow 11.8%. These come from a variety of sources - the Ministry lists the areas where it expects to increase revenues, including a special levy on companies, taxes on illegal buildings and land violations, taxes based on the increased legal value for real estate and others.

Can Greece raise this revenue? It is worth looking at the under-performance of the revenue side of the budget in 2010 for clues. Unlike common perception - indeed the view from Lex - the main problem is not the inability to collect taxes per se. About 40% of the shortfall comes from lower than expected revenues from income and property taxes, which could signal a tax collection weakness. The gap that can be attributed to lower than expected collection of taxes in arrears is even less: €160 million versus an overall shortfall that almost reaches €5 billion. Not that Greece does not need to boost its tax collection procedures; my point is only that the budget does not hinge on that. 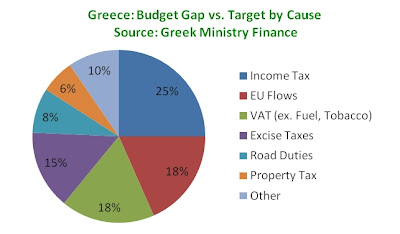 Much bigger problems are the inability to absorb EU funds for the Public Investment Budget (€890 million);* lower VAT receipts from goods excluding fuel and tobacco (€850 million); lower excise taxes (€711 million); and lower road duties (€406 million). With the exception of EU funds for the PIB, these emerge from insufficient consumer spending rather than a weak tax collection apparatus. Thus, the recovery of the Greek economy and the renewed confidence of the Greek consumer - more than pure tax collection - will be key in meeting the state's revenue targets for 2011.
* You will not find these numbers listed as such anywhere; what I have done is looked at the Budget Execution Bulletin and estimated the (prorated) amount that should have been received under the program and compared that to the actual revenue so far in the year.
Posted by Nikos Tsafos