The Suckers in Greece

A blog dealing with the Greek economy is a blog that deals with the insane, the delusional, and the corrupt. But there are still revelations that surprise and shock. Such is the graph below, showing salaries in the private and public sector sand in the eleven least profitable state-owned enterprises (SOEs). It is part of a presentation that the Finance Ministry published on the results of the least profitable SOE (here). 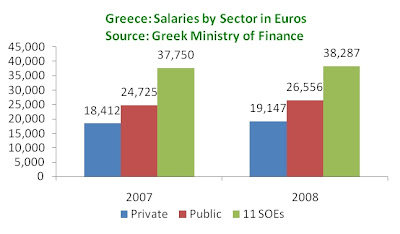 (This is the same gap one observes in other places as well, I should note – for example, the US Bureau of Labor Statistics shows that government jobs paid 44% more than private sector jobs in June 2010. But that is another story and I believe does not negate the points below).


A large public sector is linked to corruption and stifling innovation in the marketplace; it also enervates the constituency for reform. What emerges is a self-perpetuating dynamic where the political system caters to public sector employees and where the productive sector - the private sector - is squeezed as its tax contributions are increasingly used to fund public sector largess.


The implications go beyond taxes: society is divided between the private and public sectors. The eager and ambitious are told they have to start at the bottom and work their way up. Years later, they may match the salaries earned by entry-level staff in the public sector, but not their job security.


Even more, when they interact with the state bureaucracy, they encounter people that (mostly) work less and make more. More oddly, they encounter people whose dream is to find a job in government for themselves and their children. Where did the meritocracy go and does anyone seem to care? What values and dreams get rewarded? Are we "suckers" working hard in the private sector? The distortion in those incentives does more than skew the job market – society itself is turned upside down.
Posted by Nikos Tsafos