A poll conducted early November and the latest short-term confidence indicators provide a glimpse into the national mood.
The consumer confidence survey registered its lowest point ever in October 2010 at -72 (the number is the difference between the responses which indicate positive answers versus negative ones: e.g. -100 means all responses were negative). This is by far the lowest point on record since the survey started in 1985, and it also marks a progressive deterioration in consumer confidence: in 2009, the average was -45.7, while in 2010, the average has been -61.7. 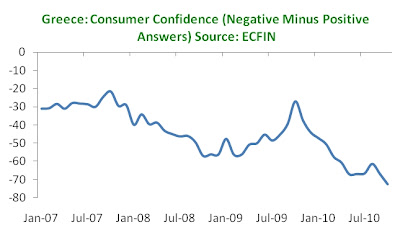 Political polls show a similar pessimism. About two-thirds of the people are fed up: 66% of the people do not trust either the prime minister nor the finance minister to handle the economy. A similar share has no faith on the leader of the opposition either. No wonder the abstention rate reached almost two-thirds in the second round of local elections in November 2010 (combining pure abstention with those voters casting an invalid ballot).

What is also interesting is the view that people have about Greece's current position. About 60% of the public believes that the country should either renegotiate with its creditors in order to pay less (46%) or cease payments and default (14%). Only 23% believe that Greece should implement the reform program underway and pay back its debts.

When it comes to assigning blame, the following graph is telling: besides successive Greek governments, the public blames speculators and Greek banks most, while there is much blame thrown on Greece's EU partners and foreign banks. There is, however, a notable 44% that puts much blame on the Greek public - though at least in my experience this tends to mean "everyone else but me." 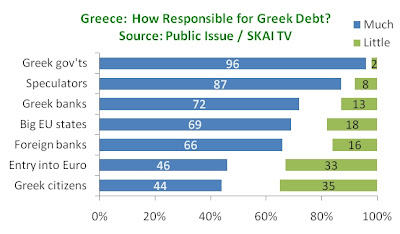 What do all these numbers tell us about Greece's condition? In general, there are three views on Greece: first is the view of the government which says "we are making unprecedented changes, give us time." Second is the view of international investors and pundits who tend to have a high level view of the "stylized facts" and who say "Greece is not meeting its targets." Third is the view of the Greek public. At best, the public can provide begrudging consent; at worst, it can oppose them. If we combine these numbers with the abstention rates, however, the message that comes across is this: "It's bad. We know it’s bad. And it will get worse. Not much we can do about it, but don't expect us to like it."
Posted by Nikos Tsafos