How Dependent Are Greek Banks on ECB Funding?

In the past year or so, Greek banks are increasingly relying on funding from the European Central Bank (ECB) to shore up their balance sheets. Presumably, this is because Greek banks carry higher risks and they are thus “shut off” from the international banking system. But how important is ECB lending? And is that reliance on the ECB growing?
To begin with, the amount that Greek banks borrow from the ECB is not reported as such. Instead, when banks borrow from the ECB, they need to post collateral with the Bank of Greece; looking at that figure lets one gauge the amount that Greek banks have borrowed from the ECB.
The graph below plots that number since 2008. As is clear, there were two waves of borrowing – the first took place towards the end of 2008 as the economic crisis unfolded, while the second wave was from February to May 2010 as the Greek economy faced increasing scrutiny and pressure in international markets. Importantly, the absolute value of ECB borrowing peaked in July 2010, although the decline since then has been minimal. 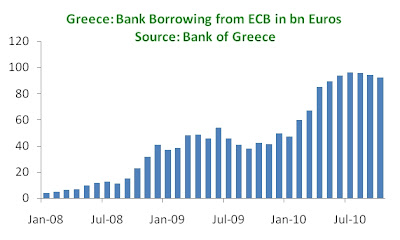 Looking at the sources of funding in more detail shows the following dynamics: since the end of 2008, the direct funding for Greek banks from non-Euro area Monetary Financial Institutions (MFIs) has declined by €15 billion (see here). Euro area MFIs have also reduced their lending Greece, although it was not until May 2010 that this happened. The ECB lending is a response to this reduced lending, but its magnitude is much greater than that, and the main driver for ECB borrowing is compensating for capital flight (see here). 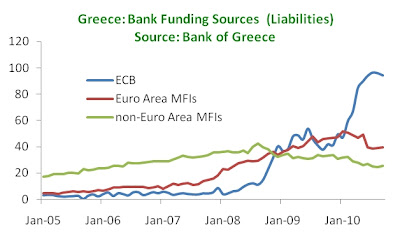 To put things differently, since December 2009, the balance sheet of Greek MFIs has increased by €62 billion. In part, this is a statistically overblown number because it includes some previously unrecorded securitized assets (€37 billion). The rest comes exclusively from the ECB which is enough to offset the decline in deposits and ensure that balance sheets keep rising. By September 2010, however, almost 18% of the assets/liabilities of Greek banks came from ECB – up from 10% in December and from 3% in September 2008.
Posted by Nikos Tsafos