Obsessed with the Spreads

The English word "spread" was almost non-existent in the Greek vocabulary nine months ago. By early 2010, however, the press and the public could talk about little else; what are the "spreads" doing today; how are the spreads reacting to the latest numbers; the spreads fell 50 basis points? Fantastic. They rose 20 basis points? Oh no - catastrophe. If there is one number that can capture the national mood, it is the "spread." But what exactly do spreads tell us about the Greek economy and its ability to avoid default?
By way of background, when people talk about spreads, they mean the difference in the yield on the 10-year government bond for Greece and the yield for the same bond for Germany. Simply put, the yield is the expected return for an investor holding a bond, and it is a function, among other things, of a bond's face value and its current price. If the bond's price falls, the yield rises. When yields rise, investors want a higher return to hold an asset. The graph below shows the yield on 10-year government bonds and, in effect, shows what interest rates investors require to hold Greek government bonds. 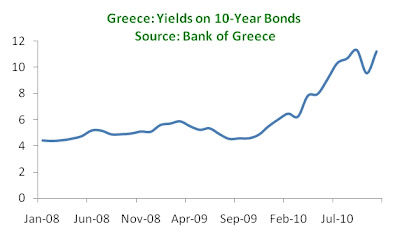 The spread is the gap between this yield curve and the yield curve of the German government bonds. Given that German bonds are equivalent to a "risk-free" asset (and thus do not move much), the yield on Greek bonds and the "spread" follow similar paths (as you can see here).

Spreads were flat for a long period of time, but towards the end of 2009, they rose a bit and peaked in December 2009. Then, they fell again, reaching a low in May 2009. They started rising again in late 2009 and experienced a steady increase with the exception of two lulls: May 2010, after the Greek government announced it had reached a loan agreement with Europe and the IMF; and in September 2010 after the first positive review of Greece's progress by the IMF. Recently, however, the spreads have risen again, partly due to fears that a revision in Greece's deficit and debt figures will force the government to take further measures that will only deepen the country's recession.

But what precisely do rising spreads mean? They mean that investors demand a higher price for holding Greek government debt. But there are several caveats in turns of what this statement really means.

Greece is not really raising long-term funds in international markets: its funding needs are being met by the IMF and the European Union. Greece is indeed active in international markets, but its sole transactions since June 2010 have been in the short-term market with T-bills that have a duration of 13 or 26 weeks. The yields for these transactions are much lower since the fear of default is lower. Since Greece is not raising new funds, rising yields do not impact borrowing costs: what Greece owes investors is determined by bonds it has already issued.

Even so, don't the yields indicate the risk that investors attach to Greek bonds? In theory, yes. But since May 2010, the secondary market for Greek bonds has essentially disappeared. On average, in 2009, the trading volume for Greek bonds in the secondary market was €27.2 billion a month. In the first quarter of 2010, that volume had dropped to an average €23.4 billion a month. After May 2010, however, the trading volume collapsed to €1.4 billion a month. In other words, higher yields demonstrate higher perceived risk, but among a smaller group of active trades. They are therefore less meaningful as a price signal on what Greece would be able to theoretically borrow for if it went to the market. 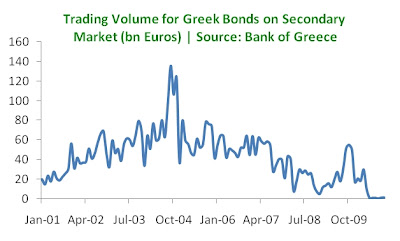 There is one area where higher spreads matter: as collateral. When banks conduct transactions, they have to post collateral, and what others accept as collateral varies. If Greek government bonds are less desirable, they are less useful as collateral, and that can hamper transactions. At the same time, Greek banks have relied more on the European Central Bank, rather than commercial banks, for funding. For the ECB, the main parameters for valuing collateral are credit rating, maturity and liquidity - so higher yields may be less important.

Does that mean that spreads do not matter? Of course not. They are useful indicators of market sentiment, although they are not as telling as some analysts or the press seem to suggest. They tell a story in other words, but not the whole story by any means.
Posted by Nikos Tsafos