Start with easy question: what do they mean? Right now, very little. Greek bonds are already rated below investment grade according to both Moody’s and Standard & Poor’s; if Fitch also downgrades the bonds to junk, the impact is small. A downgrade usually means higher costs to borrow, but since Greece is not raising funds right now, these costs are theoretical, not real. The burden on the economy is set by interest payments on debt issued, and this is not affected by any changes in the price of current debt (see also my post on spreads).

At the same time, Greece has raised over €10 billion in eight auctions for 13- and 26-week T-bills since May 2010. Yields have been flat in 2010, and they are also close to 2008 levels (but still above pre-2008 levels). In other words, Greece is still taping the short-term debt market at reasonable rates, and this ability has yet to be compromised. 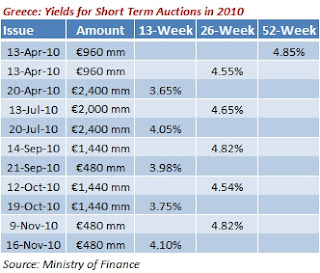 Now the bigger question: is this downgrade justified? Moody’s cited the higher-than-expected revision in debt statistics; the 2010 shortfall in revenues; and the support that Greece may (or may not) have post 2013. Standard & Poor’s mentioned the new European mechanism for countries in crisis post 2013 which may force bondholders to take losses as a precondition for any rescue package. Fitch underscored “the political will and capacity of the Greek state to carry the measures required by the IMF-EU programme.”

Valid concerns all. But new concerns? Doubtful. Loud protests, 24-hour strikes, social unrest – how can anyone be surprised by these? Little has happened to signal that the government is any less willing to make tough choices. Political will has always been the swing variable and nothing suggests that the will has dissipated at all.

New is the European rescue mechanism post 2013. In theory, the mechanism says that rescue packages may involve some losses for holders of debt. But even if that mechanism – which remains very unclear at this stage and probably will remain so for some time – does not change the fundamental realities of the Greek crisis: Greece’s debt will keep rising until 2012-2013; structural reform that delivers growth is the key ingredient to long-term debt sustainability; and the ability to avoid default rests on the willingness of the markets to lend money to Greece in 2013 when the current support package expires (see here). Little in that basic story has changed.
Posted by Nikos Tsafos