To believe that Greece can avoid default is to believe that it can create sustainable long-term economic growth. Without it, no reforms, no bailouts, nothing will save it. So where might Greece find growth?

First ask, where has Greece’s growth come from? Between 2001 and 2008, 78% of Greece’s growth came from private consumption; government spending and investment each contributed 17%. Because Greece ran persistent trade deficits, trade subtracted 12% (exports are a minus in the GDP equation). This distribution is atypical: in the EU-15, in the same period, only 53% of growth came from consumption, 25% from government spending and 20% from investment. Trade also made a 2% contribution in Europe. 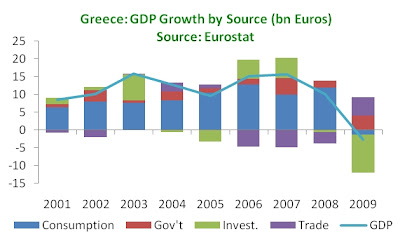 The excessive reliance on consumption for growth reflects, in part, the undue dependence of the Greek economy on consumption, which made up 74.8% of 2009 GDP versus 58.4% in the EU-15. Greece is in fact the country with the greatest reliance on consumption for GDP, several percentage points ahead of second Portugal at 67%. In part, this disparity emerges because Greece is running larger deficits than its peers. But it is also due to less government spending and less investment by companies. 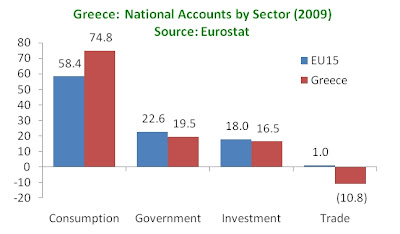 What about specific industries and their importance for GDP? The nomenclature breaks GDP into 6, 31 or 60 subsectors. Let’s focus on the six.

Agriculture; fishing. In 2000, agriculture and fishing made up 6.5% of gross value added (gross value added plus taxes equal GDP). Between then and 2009, however, the contribution from this sector declined in both absolute and relative terms to 3.2% of GVA. Even at that reduced rate, however, this sector had a disproportionate importance relative to the European average (EU-15) of 1.5%. In Greece’s case, there is an added issue: the sector employs 11.5% of the people, the highest in the EU-15 and three times the average of 3.4%. The mismatch between employment and GVA is striking and underlines the importance of absorbing the rural labor force into more productive uses.

Industry (except construction). In 2000, industry made up 14% of GVA, and in 2009, it did 13.3% - so industry has grown in tandem with the rest of the economy. The share of industry, however, is below the European average (17.4%), although the share of industry in Europe has been falling declined – it used to be 22.2% in 2000. This reflects a process of deindustrialization and/or more focus on services. From an employment perspective, only 11.5% of the people work in this sector, making Greece the country with the fourth lowest share of industrial employment. However, there is overlap between industrial output and industrial employment.

Construction. Construction’s share in the economy was relatively stable throughout the 2000s, although the sector experienced a 27% drop in 2008 and 2009. By 2009, it made up just 4.6% of GVA. This share is below a European average of 6.2% and it is also below the share of Greek employment in construction at 7.7%. However, a rebound from the 2008-2009 collapse would easily bring construction’s share of GVA in line with European norms and with employment.

Wholesale and retail trade; hotels and restaurants; transport. This is by far the most important sector for Greece, making up 30.1% of GVA in 2000 and 33% in 2009. Almost 40% of Greece’s growth from 2000 came from this sector, driven by three segments: water transport (shipping), post and telecommunications (mobile telephony) and hotels and restaurants. This sector employs 32.3% of the people, which is broadly in line with its output share. These numbers make Greece more heavily reliant on this sector than any other European country and by a wide margin (EU-15 average for GVA is just 20.6%). However, this is also a sector that is highly cyclical; it was the sector that fell the most in 2009 after construction (in absolute terms the decline was the greatest of all sectors).

Financial intermediation; real estate. The share of this sector has been broadly flat, accounting for 20.6% of GVA in 2000 and 20.1% in 2009. The sector also employs just 10.1% of the people, so it is punching above its weight. In Europe as a whole (EU-15) the contribution of this sector to GVA is 29.8%, up from 26.3% in 2000. For a sector that in Europe employs just 17% of the people, this is certainly a very important contribution to the economy. It is also relatively stable, having shown the smallest declines in 2009 (second only to government spending, which rose in Europe in 2009). While the Greek sector is performing similarly well to Europe (in terms of GVA relative to employment), there is probably scope for more contribution to GVA.

Public administration and community services; activities of households. From 21.7% of GVA in 2000, this sector made up 25.7% of GVA in 2009. This includes both public salaries as well as items such as education, recreation, etc. In terms of employment, this sector made up 26.8% of the total, broadly in line with the GVA contribution. The GVA share is slightly above the EU-15 average of 24.5% and the employment is just below the EU-15 average of 31.7%.

What conclusions can one draw from this analysis? Our first set of data points shows that Greece (a) needs to correct its current account deficit which is wildly off European norms; and (b) that it needs to rely more on investment and government spending (public investment, not public sector salaries and social transfers) rather than private consumption.

Our second set of data points shows that (a) agricultural employment remains a big drag; (b) industrial production is much below European norms, as is financial intermediation / real estate; and that (c) the greater-than-average dependence on wholesale trade exposes Greece to over-cyclicality. Not that Greece should always seek to reach European levels because they are “right” but they certainly suggest some directionally important dynamics.
Posted by Nikos Tsafos