Long-term reform requires that the government tackle the mess that is Greece’s educational system. This is a vast subject with many facets; I want to limit myself here to the brain drain that the country experiences when Greeks study (and often stay) abroad – a subject that is close to my heart since I too contribute to the brain drain. Still, I want to limit this post to some numbers on the subject.

In 2008, there were 34,200 Greek students studying abroad according to the OECD, of which 37% in the United Kingdom, 16% in Germany, 13% in Italy, and 6% each in the United States and France. On a per capita basis, Greece ranks 63 out of 207 countries in terms of students abroad. Yet given that most countries on the list are small or micro-states, Greece’s relative position is in fact higher: looking at countries with at least 5 million people (an arbitrary cutoff), Greece jumps to fifth place (out of 113) after Slovakia, Hong Kong, Bulgaria and Zimbabwe. 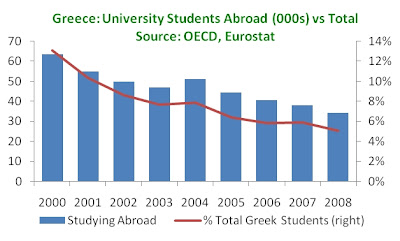 What happened? Quality improvements in tertiary education are probably not the answer; I say this purely based on anecdotes and stories about the state of Greek universities. Instead, what happened is that the enrollment in Greek universities grew by 50% since 2000. Fewer students go abroad because more can go to Greece. Likely, this is keeping at home students who would otherwise give up and leave the country, but it is unlikely to have dissuaded those who reject the system wholesale as one that does not offer enough opportunities to begin with.

How this plays out will be central to Greece’s future trajectory. There is a story about Ireland that is quite relevant here. In 1990 Intel said it would set up operations in the country. This was a success for the Industrial Development Authority (IDA) whose goal was to promote investment in Ireland. To convince Intel, IDA had to reassure it that the country had qualified people; “The IDA came up with a plan to address Intel’s concern: [IDA CEO Kieran] McGowan compiled a list of Irish engineers working at semiconductor businesses, mainly in the United States, who would be willing to return to Ireland. As McGowan put it, ‘We presented a booklet to Intel with the names, addresses and phone numbers of 85 people. And I think that impressed them’” (here).

I think the next three years will be a key period in determining how long that booklet will be for Greeks living abroad.
Posted by Nikos Tsafos

Email ThisBlogThis!Share to TwitterShare to FacebookShare to Pinterest
Labels: Education