The Greek Statistical Agency released its inflation estimates for November 2010 and there is finally a noticeable downward trend in annualized inflation, which is a central element in Greece correcting its years of over-inflation and regaining relative competitiveness (see previous posts here). From a peak rate of 5.7% in September 2010, inflation has come down to 4.8% in November. This drop is in itself good news; but it is better news when coupled with a small but continuing rise in Euro area inflation which is estimated to have hit 1.9% in November 2010. This is the same rate as in October 2010 but both months mark the highest inflation rates since the crisis began, when inflation was 2.1% in November 2008. Clearly the price adjustment that Greece needs to make is still considerable, but this is a good data point in that direction. 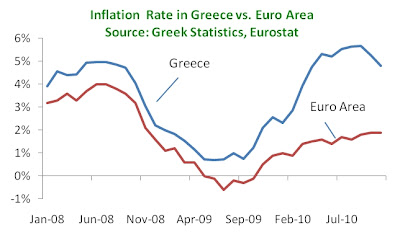