Another Dismal Year for Greek Tourism

Greek tourism once again failed to provide the stimulus which politicians and economists hope it would. While easy to blame the financial crisis – and the contraction in travelers’ income – Greece’s challenges are structural, not cyclical.

The Bank of Greece has published data only up to November, but this is a seasonal business, and December usually accounts for below 2% of annual revenues. So what does the data tell us so far? Gross tourism receipts fell by 7.3% in 2010; net receipts, which subtract spending by Greeks traveling abroad, fell by slightly less, 7%. This decline comes on top of an 11% drop in 2009, so 2010 is about 17% below the 2008 peak. In nominal terms, this puts Greece back to where it was in 2003 or 2004; in real terms, even further since Greek tourism has experienced a steady decline in the last decade (see here).

The Greek Statistical Agency has data for non-resident arrivals (a proxy for tourists) going back only to 2007, when Greece received 16.1 million tourists. That number declined in both 2008 and 2009 when it bottomed out at just 14.9 million. Interestingly, arrivals increased by 1.5% in the first three quarters of 2010. What is happening, therefore, is that more people have come to Greece in 2010 but they have spent less money; analyzing these spending patterns is key to understanding what is happening to Greek tourism.

The Bank of Greece reports on three types of data points: number of nights stayed per visit; spending per journey; and spending per night (just divide the first two variables). Then the Greek Statistical Agency reports on non-resident arrivals to give a sense of market share. Put these together and the following conclusions emerge:

Duration: On average, tourists stayed in Greece for 9.5 nights in 2009, down from 10.7 days in 2005. In terms of variation, tourists from Cyprus stayed for almost 16 days while tourists from Albania stayed just 2.7 days. In 2010, there was some recovery in the duration of stay in Q1 and Q2, though not Q3 (which is the most important quarter). 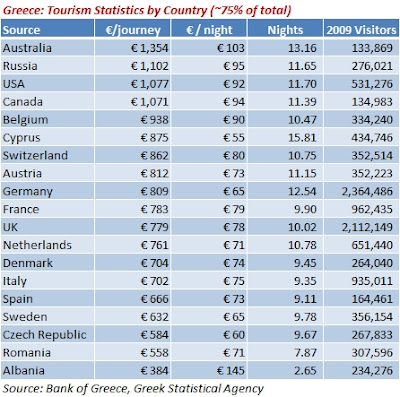 Spending per night: On average, tourists spent €73.5 per night in 2009, up from €69.7 in 2005. Looking at the range, it went from €144 (Albania) to €55 (Cyprus) – interestingly, the positions are exactly reversed with longer stay meaning lower revenues per night. Even so, a Cypriot tourist still spent more than twice more per journey than the average Albanian tourist. In 2010, spending per night registered a steady decline, building on losses registered in 2009.

Spending per journey: On average, tourists spent €697 for a journey, down from €745 in 2005. In 2010, there was also a steady decline in Q2 and Q3 in spending per journey (Q1 was up but Q1 is almost meaningless given the size of the tourist influx). In terms of spread, Australian tourists seem to spend the most for their journey (€1,354) while Albanians spend the least (€384). 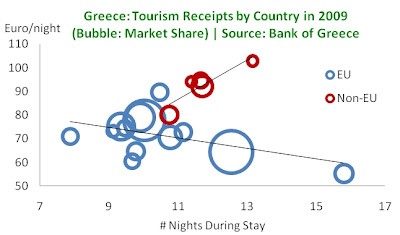 Put all this together and you have the graph above: there is a nearly neat distinction between EU tourists and non-EU tourists. Europeans tend to spend less per overnight stay than “premium” non-EU tourists from Australia, Russia, Switzerland, Canada and the United States. In fact, as the bubble chart shows, European tourists tend to spend less money while staying more nights, while non-European tourists spend more money and stay longer. The problem is that the European tourists from countries in this chart make up over half the total; by contrast, the “premium” visitors from Australia, Russia, Switzerland, Canada and the United States make up just 10%.

All this shows a deep structural crisis: Greece can attract European tourists, who make up 90% of the total visitors (this included non-EU European tourists). However, it seems to attract them by offering cheaper and cheaper offerings, or by offering more days at a lower price per night. Outside Europe, Greece has made some gains in increasing its intake of Australian tourists, but these are more than offset by a diminishing number of American and Canadian tourists. Russia is the striking exception – high paying and growing numbers, making up 3.2% of the total tourist base in the first nine months of 2010. But this is an exception to a broader downward trend.
Posted by Nikos Tsafos