The Ministry of Finance has published its Budget Execution Bulletin for December 2010, thus offering initial estimates for all of 2010 (here). At the end, the Greek government was able to increase revenues by 5.5% in 2010 versus a 6% target; it reduced spending by 9% versus a 7.5% target; and it shrank the deficit by 36.5% versus a 33.2% target. As the numbers for the whole year become available, it is useful to review how these figures played out during the year.

In early 2010, the government had a target to increase revenues by 11-12%, a target that was in fact supported by the data that came in for January and February. Starting in March, however, there was a progressive decline in the year-on-year increases in revenues (cumulative): from 16.6% growth in January to as low as 3.3% growth in August. The target, meanwhile, had remained constant until May and then rose in June as a result of the program agreed to with the IMF and the Europeans. 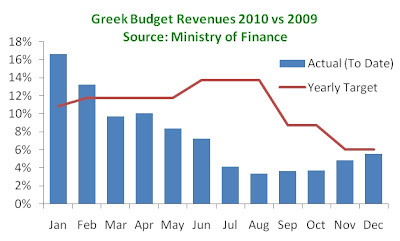 Starting in September, these dynamics reversed. Faced with the reality of significantly lower revenues than budgeted, the government started to adjust its targets: in September it reduced its 2010 target from 13.7% to merely 8.7%. Then in November, it brought it down again to just 6%. Yet the performance of revenues began to improve: from a low point of just 3.3%, revenue growth reached 5.5% in December 2010.

Spending was a completely different story. While for revenues, the government was only twice within its target (January and February), for spending, it was almost always within target. At the start of the year, it had modest ambitions of reducing spending by just 2.8%. Against this target, spending was declining at 10%-11%, meaning that the government would clearly be able to cut spending by much more than initially anticipated. 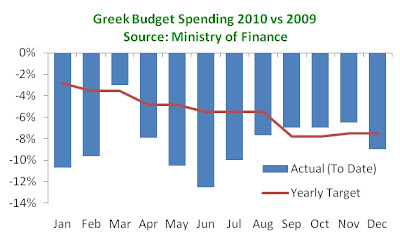 It took a while, however, before the government made a step-change adjustment to its target. Throughout the second quarter, it was clear that the spending achievements far outpaced the spending targets: the declines were almost twice as large as the targets. But after a peak in June, the spending reductions started to moderate. While the government made an adjustment to its target from 5.5% to 7.8% in September 2010, the contraction in spending reductions was such that in September, October and November, the actual reductions to date were lower than the targets. It was only in December that the reduction again exceeded the target.

In terms of the budget deficit, Greece started off targeting a 27% reduction, a number that in retrospect proved low. As the deficit figures showed continued strength, the government made progressive adjustments to its target, slowly raising it from 27% in January to 39.5% in June. Starting in August, however, as revenue growth slowed and spending cuts moderated, the deficit target started to seem like it would be missed. From July to November, the deficit reduction went from 39.7% to 27.4%. It was only in December that it recovered, ending at 36.5%, a little above the 33.2% target and a little below the 39.5% maximum target. 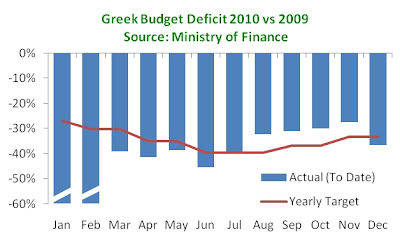