The Decline of Religious Weddings in Greece

One of Greece’s most difficult tests will be to maintain social cohesion in the midst of an economic crisis. Cohesion will be tested as social classes clash; but more importantly it will be tests in how Greece deals with immigrants. What is at issue is the concept and the malleability of Greek identity – and while this is a vast subject, I thought these numbers should put some cherished notions of Greek religiousness in particular in some perspective. 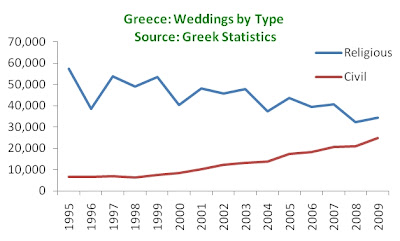 Now look at this second graph which shows the overall rate of weddings in the country. The data shows four-year rolling averages to smoothen the volatility that comes from the fact that people avoiding getting married on leap years because they think it is bad luck; it is also normalized per 1,000 people. There is an unmistakable long-term decline in weddings since the mid 1960s. But the decline in weddings has stopped at roughly the same time that civil marriages started to rise in the early 2000s. The institution of marriage is being “saved” by civil, not religious marriages. 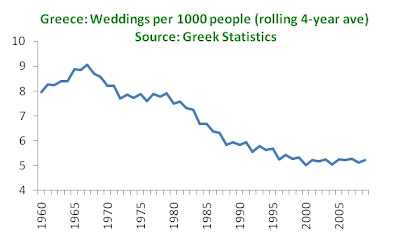 What does this mean? I have no intent to read too much into these two graphs. Greece’s religious identity has always been a mixture of religiosity and tradition, and marriage is a small part of that web of practices and beliefs we call religion anyway.

But as we ask “who is a Greek,” people will start making certain statements and assumptions and, inevitably, those assumptions will be interlinked with religious identity. In those times it will be good to ask how important is religion in modern Greece and to what extent does it define who is a Greek? And in answering these deep questions, the numbers above should make us pause before asserting the unshakable link between Greek Orthodoxy and Greek identity.
Posted by Nikos Tsafos