Over the past few days, the Greek government has had its first public clash with the troika. At issue is a press conference where members of the IMF, ECB and EC announced plans so sell up to €50 billion of the state’s assets. Putting aside the theatrics of the dispute – who should have said what, where and how – and let us ask, is €50 billion a realistic number and did it, in fact, come out of nowhere?

At the start of the memorandum, in May 2010, the IMF was forecasting annual privatization receipts of €1 billion from 2011 to 2015, for a total of €5 billion. It also stated that by December 2010, the Greek government would have prepared “a privatization plan for the divestment of state assets and enterprises with the aim to raise at least €1 billion a year during the period 2011‒2013.” The first review of the Program, released in September 2010, says little more.

The second review, released in December 2010, noted that, “The authorities are preparing a more ambitious three year privatization strategy than originally foreseen in the program … The authorities are working towards a more ambitious privatization plan, with the aim to raise at least €7 billion over the next three years (3 percent of GDP), including at least €1 billion in 2011 … To further develop the plan, the authorities indicated that by mid-2011 they would make an inventory of real estate holdings.”

What these writings show is (a) from the start, the privatization plan was meant to be articulated in the end of 2010 – hence, targets released until that date (€5 or €7 billion) are best seen as tentative; and (b) that there has been, at least since December, an eye towards having more privatizations, as seen by the “inventory of real estate holdings” planned for mid-2011.

But why €50 billion? The point of departure is a table shown by the IMF in its December 2010 review that lists public sector assets. The IMF shows that Greece had €195 billion in assets, broken down in the following categories: €12 billion in currency, €2 billion in securities, €1 billion in loans, €39 billion in shares, €21 billion in other financial assets, and €120 billion in public sector capital stock. There is also an “n/a” entry for real estate, pending the mid-2011 inventory listed above, but the IMF notes that analysts have estimated real estate holdings at €200-€300 billion. References in the press to the Hellenic Public Real Estate Corporation show holdings to have an “objective” value of €272 billion, with total holdings reaching €300 billion.

So the starting point is some €330 billion in debt and some €500 billion in assets. Obviously, just selling assets to pay down debt is not an ideal strategy, although the point that has been made by the troika – that Greece can take advantage of the low trading value of its bonds – is important. Greece’s debt has a face value of €330 billion, but Greek bonds trade at a discount to their face value. If the state were to raise €10 billion from asset sales, it could shrink the debt by €12 or €13 billion. Since the selling assets also shrinks liabilities (loss-making enterprises, for example), there is a triple accounting benefit.

All this takes us back to the main question: can Greece do €50 billion? Since 1991, Greece has raised $29.2 billion from privatization proceeds, of which three-fourths have come from finance, real estate, telecommunications and transportation. In the period 2005 to 2009, it was raising an average of $2.9 billion a year – in today’s exchange rates, that is equal to €2.1 billion a year. In other words, the €5 or even the €7 billion estimated for a five-year period is timid – at best, it assumes a continuation of pre-crisis sale trends. Of course, today’s market environment is tighter and getting a good price is not as easy. Even so, the past targets indicated no serious commitment to the downscaling of the Greek state sector – just business as usual. 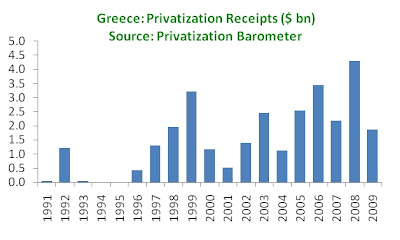 This is the context in which to think of this €50 billion target: one tenth of Greek asset holdings, requiring a privatization schedule that is aggressive and that requires a doubling of the effort versus the best privatization years, but also has the potential to lower the debt disproportionately, cut future deficits, can further remove the state away from the economy, and can help utilize all those assets that Greeks have long complained are going unused. Better to have a €50 billion target and miss it than have a €7 billion and achieve it.
Posted by Nikos Tsafos