In the past, I noted that it was good for Greece to have ambitious privatization targets and that the government’s initial targets of raising €5-€7 billion through privatizations were timid given Greece’s own history (see here). Now, in its most review of Greece’s program, the IMF compared Greece’s privatization challenge with the experience of other countries, noting that the target for Greece to raise €50 billion from asset sales “would be at the high end of the pace that other countries have in the past managed to adhere to.” The table below provides more information.

The table examines five episodes of large privatizations: Peru, Estonia, Argentina, Hungary and Greece. Each privatization effort was a multi-year affair, ranging from 4 years (Peru) to 8 years (Hungary). These countries were able to raise annual proceeds of anywhere from 1.8% of GDP to as high as 4% of GDP, for a cumulative effect of anywhere from 11.1% to 32% of GDP. By contrast, says the IMF, Greece’s target would entail a five-year effort to raise 4% of GDP in annual proceeds and 20% of average GDP. In other words, hard but doable.

One obvious problem with this analysis is that the data set is very narrow: it looks at only five episodes, all of which took place in the 1990s (the paper it is drawing from was written in 2000). To put a little more context to Greece’s current predicament, I enlarged the analysis by looking at privatization proceeds in 23 European countries since 1981. The result is 390 annual observations of privatization proceeds as a share of GDP (see below for details on my approach). This analysis reveals several important conclusions: 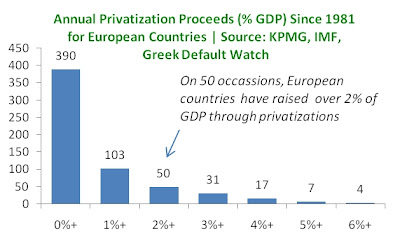