Are We All Greeks Now? Greek Political Economy and the Origins of Greek Debt

Greece used to be a beacon for the Western World. Now, it has turned into a lighthouse, warning debt-ridden countries on what path to avoid. Near the one-year anniversary of Greece’s bail-out, what can the world learn from Greece?

To learn the right lessons we first need a diagnosis – what happened to Greece? The bail out that the country negotiated in May 2010 was triggered by rising borrowing costs for a large and constantly revised budget deficit, which came on top of a large and also constantly revised public debt. But this tough position was only partly the result of the global financial crisis. In was rather the culmination of over 30 years worth of failed policies. This is a political crisis with economic dimensions.

To think about what happened to Greece, I want to turn to two concepts: Greece as a rentier state and Greece as a country facing soft budget constraints. Neither is a perfect analogy, but together they tell a compelling story.

A rentier state is the political science term for a state where “money grows on trees.” The money comes from either natural resources (think oil and Saudi Arabia) or from extorting a foreign state that for reasons of security or self-interest subsidizes the target country (think North Korea and China). Rentier states are distinguished by two features: they excel at spending money rather than raising it; and they tend to lack a social pact between governing and governed. Without a need to tax, the motto “no taxation without representation” does not work.

Running a rentier state is a great gig if you can get it (living in one is another matter). But few countries are as richly endowed or have the capacity to coerce a patron into giving them large sums of money for large amounts of time. What really prevents countries from being rentier states is that they face budget constraints: if they keep spending beyond their means, the money will run out.

Budget constraints, however, can be soft. It is clear that at some point, countries can no longer borrow from either their citizens or from abroad. At that moment, they are faced with a need to default on their obligations. But figuring out that point is far from easy. If Greece had been treated like Argentina, it should have defaulted in the mid 1980s – that it was able to sustain a higher debt level for so long means that the trigger from soft to hard budget constraint was much higher than for Argentina. 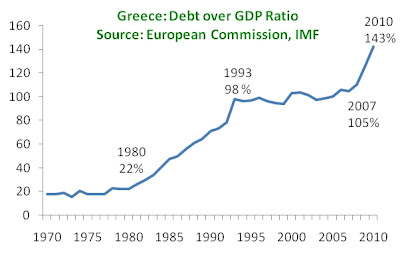 What happened in the 1980s was state spending ballooned without a corresponding increase in state revenues. In part aided by two electoral cycles (1981 and 1985), the share of state spending went from 24% of GDP in 1980 to 43% in 1988, a 19-point rise. Revenues, by contrast, rose less than 7-points from 20.4% to 27%. Looking more specifically at the spending composition, transfers such as subsidies, grants and social assistance rose from an average 25% of the budget in 1980-1982 to 32% in 1986-1988 (reaching 37% in 1998). In other words, the state in the 1980s was increasingly spending money it was unwilling to raise in order to boost its legitimacy and popularity. As George Pappas put it, “PASOK’s basic contribution to Greek politics was to take the old clientelistic structure of control and reward and ‘massify’ it.” 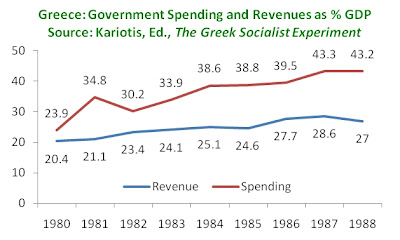 Inevitably, Greece faced an economic crisis with debt and borrowing costs spiraling out of control. Output was flat in 1990, it rose in 1991 and 1992, but the economy was again in recession in 1993. As borrowing costs spiked, Greece was borrowing more to both finance its deficit, which averaged 12% from 1988 to 1993, and to pay interest on rolling over debt. In 1990, for example, Greece was dedicating over 15% to interest payments and debt amortization.

Starting in 1993, the government started a process of fiscal consolidation that culminated in the entry in the Eurozone in 2001. These years, which were known in Greece as austerity years (λιτότητα), led to a progressive shrinkage of the deficit to (a later revised) -3.1% of GDP. The data series is incomplete, but looking at the numbers since 1995, the consolidation effort was mostly a revenue effort with revenues going from 36.7% of GDP to 43% in 2000 (see also here). Spending, by contrast, remained broadly flat from 45.7% in 1995 to 45.3% in 2000. In this period, Greece achieved normalcy: budget deficits shrank and borrowing costs fell. Yields on Greek government bonds fell from 24% in 1992 to just 6% in 2000 – the spread with the Bunds collapsed from 16 percentage points to under 1.

From 2001, the fiscal discipline that allowed Greece to enter the Eurozone began to weaken. The weakening was mostly a relaxation of revenues, which fell to a low of 38% of GDP in 2004, while spending remained flat (as a share of GDP). But with Greece in the Eurozone, yields did not respond to rising deficits, which rose to 7.4% of GDP in 2004 (aided by spending for the Olympic Games). In fact, yields continued to fall, although in fairness to the yields, the Greek government did a good job to distort official statistics and make things look better than they were (see here). And since the European Council refused to punish any member state that exceeded the 3% deficit over GDP limit that Eurozone countries were supposed to abide by, Greece’s deficits were getting a free pass. Or at least they were until Lehman brothers.

To bring us back to our initial analogies: Greece in the 1980s became a quasi-rentier state with an increasing focus on spending resources rather than raising them. Predictably this triggered a recession and progressively higher borrowing costs, which forced the country to tighten its budget deficits. Greece did not seek to lessen the burden of the state in the economy; instead, it merely sought to finance it better by boosting revenues. But once it joined the Eurozone, its hard budget constraint softened – in fact, Greece hardly faced any constraint at all since yields showed no reaction to constantly escalating deficits. When it did, it was forced to look for official help.

Stepping back a little, we can see more clearly the challenge: think of rentierism as the internal challenge and the soft budget constraint as the external challenge. The external challenge is well understood: how to convince markets to lend money to Greece at reasonable rates. Whether they will do depends in part on their own moods, but it also depends on how they read Greece’s progress towards reform.

The internal challenge is thus to create a state that transcends its role as a vehicle for patronage either directly (jobs, subsidies) or indirectly (lax tax enforcement, competitive barriers). This is a deep structural challenge that may have been amplified in the 1980s but was certainly not born then. Emmanouil Roidis, a Greek satirist, wrote in 1875: “Elsewhere parties come into existence because people disagree with each other, each wanting different things. In Greece, the exact opposite occurs: what causes parties to come into existence and compete with each other is the admirable accord with which they all want the same thing: to be fed at the public expense” (Quoted in Richard Clogg’s book “Parties and Elections in Greece.”).

These deficiencies are significant for at two reasons. First and most obvious is that the country lacks the capacity to legislate and enforce the numerous reforms it has pledged to undertake. Second and more serious is that Greece needs to create political legitimacy that is not based on state spending. Such effort must be tied to a broader agenda and message – “we will not default” is a poor slogan and it contains no vision.

So what are the lessons for countries that are looking at Greece as the first domino to fall while they sit too in the domino line?

Lesson one is that “you cannot spend beyond your means forever.” Before you ask for your money back (this is a lesson??), remember that Dick Cheney was proclaiming only a few years ago that “deficits don’t matter.” It is true that deficits can be sustainable for a long time. But eventually they will get you. If I can modify the former Vice President’s words: “Deficits don’t matter. Until they do.”

Lesson two is linked to one: soft budget constraints allow countries to get away with bad policy for a long time. Twice Greece was forced to make changes after an economic crisis: in the late 1980s and early 1990s and then against in 2010. Yet Greece’s changes in the 1990s did not last. When the political goal was met – enter the Eurozone – the consensus disappeared and in the absence of any constraints, the state reverted to its old ways.

Lesson three is that debt is a political problem, not just an economic one, and it usually reflects an underlying political economy. In Greece it was the political economy of patronage, barriers to competition and lax enforcement of taxation. It was the political economy of legitimacy through state spending and letting future generations foot the bill. That structure did more than wreck the economy: it weakened the state’s capacity to govern by making it a mechanism for spending money and it also concentrated its basis of legitimacy on one pillar – spending. This, in the end, is Greece’s challenge: to create a state where political allegiance is divorced from patronage.
Posted by Nikos Tsafos