Critics of the Greek government point to lagging state revenues to argue that the government is missing its targets – this is the number that receives the most media scrutiny and attention. And for good reason: in June 2010, after negotiating a bail-out plan with the IMF and the Europeans, Greece targeted a 13.7% increase in revenues for 2010. It achieved a 5.5% rise instead. And in Q1 2011, revenues have fallen by 8% against a targeted annual increase of +8.5% (although the projection forecast this seasonality). The (in)ability to raise revenues is thus crucial to the country’s future macro-economic stability (see here and here).

The following graph tells a compelling story for how to think of revenues and spending. It plots the historical data for state spending and state revenues as a share of GDP (taken from Eurostat) and it also shows the forecasts by the Ministry of Finance for the period to 2015 (note: the Eurostat and the MOF data differ slightly). What does the data tell us? 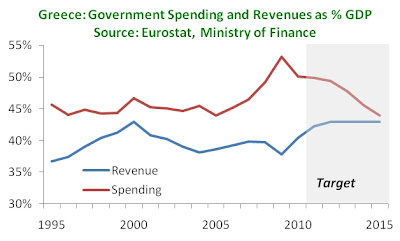 First, Greece’s fiscal consolidation plan is basically a spending plan: although the government emphasizes both revenues and spending, reducing spending far outweighs raising revenues. Spending as a share of GDP peaked at over 53% in 2009 and it is set to fall to 44% in 2015 with a 6.1 percentage point adjustment from 2010 to 2015. Revenues, by contrast, were at ~38% in 2009 and they are expected to rise to 43% - although most of the jump comes in 2011, after the share of revenues over GDP remains flat.

Thinking more broadly about spending and revenues, we can make two observations. First, government spending has been fairly flat as a share of GDP since 1995, at least until 2008, when it got out of control. The government is right that its 2015 target is to bring spending in line with past norms – which will be difficult but not unthinkable.

Second, revenues have been much more volatile in the last fifteen years. In the mid 1990s, as Greece cut its budget deficits to enter the Eurozone, it was higher revenues rather than lower spending which accounted for most of the adjustment. Revenue growth was driven by increases in tax receipts from households (14% average growth from 1995 to 2000) and corporations (20%). Looking at the period from 2000 to 2004, however, revenues fell as a share of GDP. Household taxes continued to grow at 5% but taxes on companies stagnated (-0.2%). When revenues started to rebound after 2004, they failed to rebound sufficiently – which, combined with higher spending, led to ever increasing deficits.

In that sense, the Greek government is aiming to defend revenues from falling, which they did after the last peak in 2000, and to curb spending to an extent it has never been done before. The revenue target sees revenues at the highest point they have ever been (at 43% of GDP in 2000) while spending is also forecasted at a point it has been only one before (in 2005). Greece’s target budget deficit, at 1% of GDP, is a goal that no Greek government has accomplished in 30 years.

If we also look at the past fifteen years, we can make two additional observations. First, tax collection suffered after 2000 and so the government should focus on ensuring this does not happen again. Second, this forecast says that the role of the state in the economy will resume its historical position (except in a more balanced budget). For a transition, this is fine. But going back to the level of state spending we have had since 1995 is still too much state. Reform should push for even less state.
Posted by Nikos Tsafos