Is Spiegel Right that Greece is Missing All its Fiscal Targets?

Reports by Spiegel have said that the latest IMF/EC/ECB report – which is still being compiled – “asserts … that Greece had missed all its agreed fiscal targets.” Obviously we do not know what is being discussed behind closed doors. But a close look at the numbers shows that the statement is simplistically incomplete at best.
So far, the Greek government has published Budget Execution Bulletins for the first four months of the year (see here). If one takes a high level approach to the numbers, then Spiegel is certainly correct: the deficit has increased by 13.7% in the first four months of the year against an annual target of minus 3.9%. The damage is done mostly on the revenue side with a 9.1% decline versus an annual target of plus 8.5%. Expenditures, however, have done better than expected: they increased by 3.6% versus a target increase of 6.6% (half of the target increase comes from interest payments).

But this is not the whole story: budgets at not linear instruments, and not all months are equal. So it is important to think about the deficit cycle. The following graph, recreated from the Budget Execution Bulletin, is quite revealing. It shows that although the Greek deficit is off target on an annual basis, it is right on target on a seasonal basis: only in April does the deficit get off track by €322 million. (Yes, the deficit targets in April are the same as the targets published earlier in the year - see here). From January to March, the deficit was right on target despite seeming off target when looking at annualized targets. 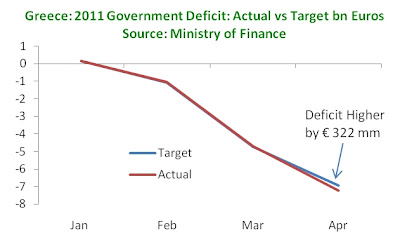 This is not to say that Greece will or will not meet its deficit targets. After all, Greece’s 2010 targets shifted constantly (see here). But my point is that when journalists report on whether Greece is on target or not, they should really spend the extra two minutes to scroll down to the bottom on an eight-page document and see for themselves.
Posted by Nikos Tsafos