The Need for Reform in the Greek Private Sector

Greece’s public debt was born largely from a bloated public sector. But the Greek private sector suffers from as many distortions and absurdities – and is in need of just as much change.

The table below is a good starting point: it comes from the European Commission’s review of the IMF/ECB/EU program (from the Ministry of Finance) and it is called, “Indicative list of professions covered by the new law on regulated professions.” The “indicative” list covers over 100 professions ranging from accountant to baker, from beekeeper to diver, from newsboy to guide, and from interpreter to midwife. In other words, the restrictions cover any conceivable profession that one could engage in. 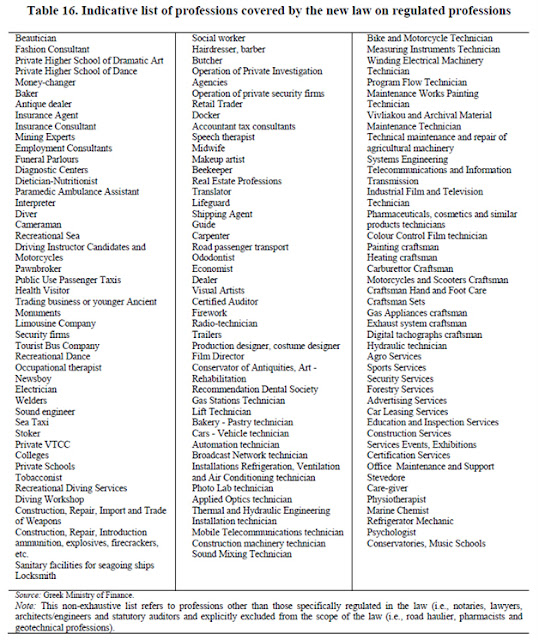 A second visual shows labor productivity per hour worked in the European Union (EU-15). Greece is second to last just ahead of Portugal. It is also, paired with Portugal, the only country to get a score below 100 (100 is the EU-27 average), which puts in the company of the new European member states rather than any of the older ones. Greece has been in that position consistently over the last decade. 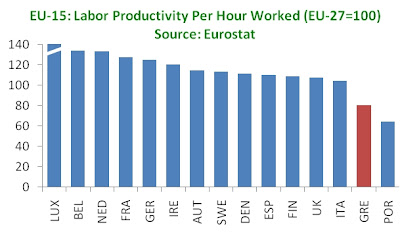 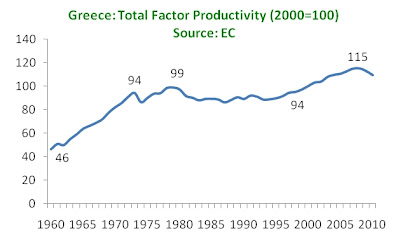 These realities – restrictiveness in competition and low productivity – are compounded by a cumbersome judicial system that is slow, erratic and non-transparent. Of course, there are companies that excel both domestically and internationally. And the average wage earner sees few benefits from these restrictions – if anything, he or she suffers doubly by low wages and higher prices. Yet this ailment is at the heart of the Greek condition – deprived of state spending, the hope rests on the private sector to be more vibrant, more entrepreneurial and more productive. And that task requires a clean break from the past.
Posted by Nikos Tsafos