The European Union seems to have finally settled on what to do about Greece. In a communiqué released on July 21, the EU approved (a) an additional €109 billion (on top of initial €110 billion); (b) an extension to the existing and future loans, together with a reduction in the interest rate charged; and (c) a participation of the private sector to the tune of €50 billion for the period 2011 to 2014. Let us run through the details of the program.
To begin with, re-examine where Greece stood before this new package was announced. First, the main tenet of the first bailout – that Greece would be able to sell long-term bonds in 2012 – was untenable as borrowing costs continued to soar. Second, the latest revision to Greece’s debt profile – chiefly due to extra support for banks – had pushed the projected debt-to-GDP peak at 172% in 2012. Third, Greece’s time was running out: while the initial program covered Greece’s financing needs until March 2012, the capital injection into the banking sector meant that Greece needed extra funds in 2011. Hence the urgency to find a solution.

Now, let’s look at the numbers more closely. The graph below shows Greece’s borrowing need based on five pieces: (a) the actual budget balance (difference between revenues and spending); (b) the amortization (roll-over) of medium and long-term debt; (c) the amortization (rollover) of short-term debt; (d) the pay back of debt to official creditors (IMF and EC); and (e) other expenses. The orange line shows the totals during the latest IMF review conducted in May 2011. 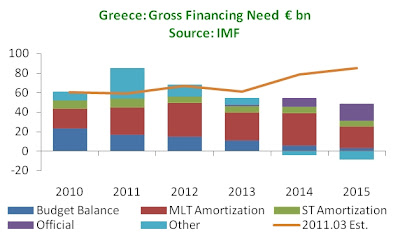 Three things stand out. First, the country’s financing needs are driven by the budget deficit and the need to amortize long-term debt. Second, the 2011 financing need shot up by €26 billion, mostly due to increased support needed for banks. And third, in the outer years, the gross financing need has come down, mostly due to the extension on the maturity of EC loans (the IMF loans have remained the same). So Greece needed more money in 2011 but less in 2013-2015.

Turn now to the revenue side. According to the March 2011 estimates, Greece’s funding needs for 2011 were covered; for 2012, the country would need to tap markets for long-term bonds. But given the new financing needs to cover, in large part, the support to the banking sector, the country is now €25 bn short in 2011. What is more, without any hope to tap markets in 2012 and 2013, the gap for those two years is now €30.2 bn and €29.4 bn respectively. Collectively, the shortfall from 2011 to 2014 comes to €103 bn. This is just below the €109 bn announced for the second aid package, which could reflect a change in assumptions or, possibly, some provisions for any slippage (for example, lower privatization receipts). 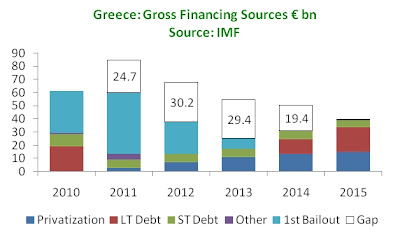 What about the extension of the EC loans and the lower interest? The first extension had made these loans a non-factor to begin with: it was only in 2014 that Greece would have to start repaying its EC loans and in that year, the burden was a mere 1.4% of the total borrowing need. So the benefit is long term.
Finally, what about the private sector participation? The aim here is to shrink the amortization schedule in 2012-2014; after all, it was the inability to roll over these debts at reasonable interest rates that created the need for a second package to begin with. However, it is possible that the private sector is more cosmetic to gain political support than real: in theory, the €109 bn is sufficient to cover the country’s needs to 2014 even if it means using the funds to amortize the debt. What is more, given the option to buy back debt, this €109 bn could yield an even greater reduction in the total debt.

In other words, the main elements of the second bailout initially proposed in late May 2011 stand: the premise is to shield the country from having to raise money until 2014 and thus give the government more time to implement reforms. The amount of the bailout is bigger than first proposed because of the need to support the banking sector. But otherwise, Greece would get an extra three-years at least to get its house in order.
Posted by Nikos Tsafos