I wrote recently about tax evasion in Greece. I wanted to focus on a related issue: tax arrears, which are taxes owed to the government but not collected yet (as opposed to tax evasion, which includes both arrears but also tax that is not reported to begin with). The Ministry of Finance estimates that arrears in June 2011 amounted to €41.1 bn, which is a staggeringly high number as the table below shows: 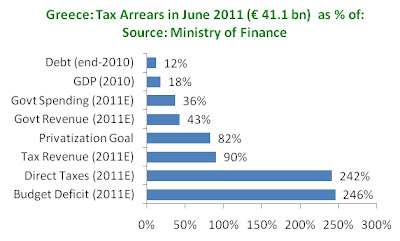 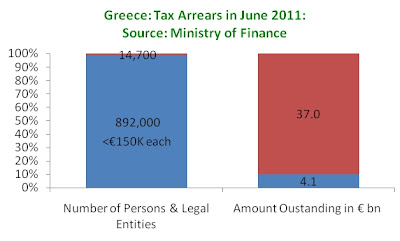 There is not much more to say about these numbers that is not obvious – the demonstration, once again, of a status apparatus that does not work, of political legitimacy and will that is lacking, and of the implications of such laxness for society’s sense of fairness. But there is also a broader point: one that is linked to the utilization of state assets and public property that is estimated to be as high as €500-€600 billion; of how much this country can accomplish with better management and more will.
Gives the phrase «λεφτά υπάρχουν» (“there is money”) new meaning.
Posted by Nikos Tsafos