James Surowiecki of the New Yorker has written an insightful column on tax evasion in Greece. Together with Mike Lewis – whose portrait on Greece contained a large section on the subject – he paints an accurate picture of the fact but does not answer certain key questions. I want to focus on three in particular: where did tax evasion come from; how important is tax compliance for Greece’s future; and if Greeks paid their taxes, would the country’s fiscal woes disappear?

Where did tax evasion come from? Judging from several accounts, it almost seems like Greeks woke up one day and decided to stop paying taxes. Lewis quotes a Greek tax collector who said, “The Greek people never learned to pay their taxes. And they never did because no one is punished. No one has ever been punished. It’s a cavalier offense—like a gentleman not opening a door for a lady.” Surowiecki notes that, “tax evasion is the national pastime.” Of course, both recognize that tax evasion has political roots connected to law enforcement and to electoral cycles. But I think there is a broader story that they are missing.

The place to start is to look at government spending and government revenues over the last thirty years (see also here). Three observations stand out: first, there was a long-term increase in revenues as a share of GDP from 1980 to 2000; second, that trend weakened from 2000 to 2004, after which point revenues started to rise again but without reaching their 2000 peak; and third, elections in the 1980s were highly correlated with a drop in revenues: notice the “v-shape” in revenues in 1985 and 1989. This is consistent with Surowiecki’s note that, “a recent study showed that enforcement of the tax laws loosened in the months leading up to elections, because incumbents didn’t want to annoy voters and contributors.” 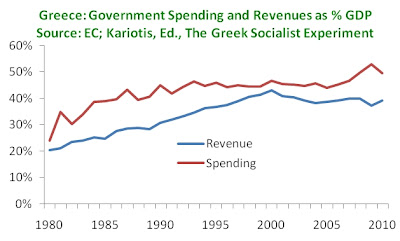 This last observation is subject to two additional comments, however. First, the electoral cycle is highly noticeable in the 1980s but not since then. The only other electoral year where revenues decreased as a share of GDP was 2004, although the drop was part of a multi-year trend (in 2009, there was also a drop but a sharp recession could help explain that). And second, and most crucially, the electoral drops represented a cyclical rather than structural phenomenon. In other words, government revenues in the post election years of 1986 and 1990 were roughly on trend: lax enforcement had no structural impact from a high-level perspective (though it affected norms and corruption perceptions).

Looking at our chart again, one observation really stands out: it is easier to spend money than to raise it. That seems to have been the problem of the Greek state. It started to spend money in the 1980s, but it took a very long time to build the institutional capability to raise that money. In effect, it took twenty years before Greece was able to bring revenues close to spending – and the 1999 budget deficit remains the lowest one in the last thirty years.

That brings us to question number two: how important is it to plug this hole? Surowiecki writes that “the future of the European Union may depend on [Greece’s tax reform].” This is an exaggeration. The European Commission notes that tax compliance forms about 14% of the fiscal measures implemented in the medium-term strategy; plus, “no improvement in tax compliance has been considered in the projections through 2012 to reduce budgeting risks.” So the program hardly rests on cracking down on tax evasion. 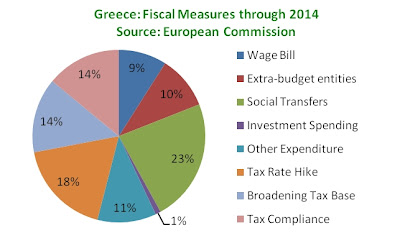 What about the third question: would Greece’s fiscal problems go away if tax evasion were eliminated? Surowiecki notes that, “the gap between what Greek taxpayers owed last year and what they paid was about a third of total tax revenue, roughly the size of the country’s budget deficit.” Strictly speaking, he is right: if the government were able to collect all its taxes, its budgetary position would be greatly improved.

But such a diagnosis misses a broader issue: that the Greek government spends too much money not just relative to revenues but relative to the services that it provides to the Greek people and relative to the opportunity cost that such spending entails. In other words, if the budget hole could be eliminated by bringing revenues in line with expenditures, that would solve the fiscal but not the economic problem. A greater transfer of resources from the productive to the non-productive sector is not really an answer to Greece’s economic woes. For that reason, the government’s fiscal plan is focused on spending contraction rather than revenue enhancement (see here and here).

The reason that eliminating tax evasion is important is not fiscal but political. The public’s sense of justice would be significantly enhanced by increased perception that tax fraud was prosecuted and that those who cheat are caught and punished. In other words, fighting tax evasion matters not because it will bring money to the government (which it will) but because it is the right thing to do – and Greeks need at least some evidence that their government is willing to do the right thing from time to time
Posted by Nikos Tsafos