Is Greece Fudging its Deficit Numbers?

Greek statistics have come a long way, and I do not mean to suggest that Greece’s numbers are wrong. Rather I want to focus on a specific question: to what extend are the budget deficit numbers reported by the Ministry of Finance a reliable indicator of how much Greek finances are improving?

In June 2011, Greece’s central government deficit stood at €12.8 bn or 23% higher than the target deficit of €10.4 bn. According to the Greek government, the measures implemented in the medium term strategy should close that gap by year end. Yet these numbers severely under-estimate how off the target the budget truly is: while the deficit is 23% higher, Greece (a) has made severe cuts to public investment and (b) has continued to accumulate significant arrears (overdue bills). With these two pieces the deficit may be more than 50% off target.
First, look at the Budget Execution Monitor published by the Ministry of Finance, which shows that starting in May 2011, budget deficits have become progressively off target: in fact, by June 2011, there is a €2.3 billion gap between the target deficit and the actual deficit. So far so good. 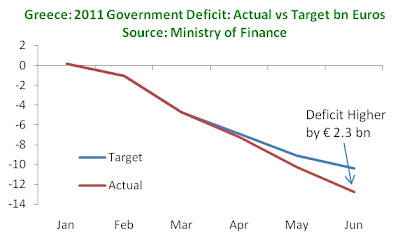 Second, zoom in on the drivers of that gap: compared to the target, revenues are lower by €3.3 bn (13%), while spending is €1.3 bn higher (4%). However, note that the Public Investment Budget is off by €2.2 bn – meaning that the government should have invested €2.2 bn more than it did. The lack of spending counts as a positive for the deficit, but effectively the deficit would have been €14.9 bn had the Greek government not simply choked off funding from public investment to keep its finances in check. 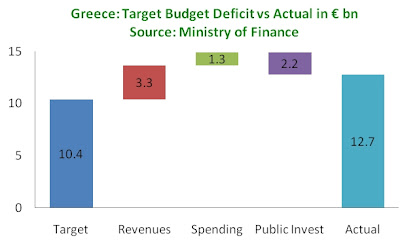 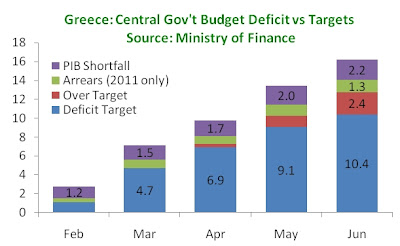 If we now add everything together, Greece was targeting a €10.4 bn budget deficit by June 2011. It ended up with €12.8 bn instead. But to accomplish this, it added €1.3 bn to its unpaid bills and it reduced funding for public investment by €2.2 bn. If the Greek government was paying its bills on time (ignoring the accumulated arrears by end 2010) and if public investment were on track, Greece’s budget deficit would be €16.2 bn and hence off by 56% rather than 23%. And that is a completely different picture about how well Greece is doing.
Posted by Nikos Tsafos