The Greek Statistical Authority has revised its GDP estimates for 2006 to 2010. All the revisions, save the one for 2010, resulted in a lower GDP estimate, bringing 2010 GDP down by 2.9% in real terms. I don’t want to read too much into these revisions, but consider the following: the government now says it expects the economy to shrink by 5.5% in 2011 and by 2.5% in 2012. With the revisions in both the historical numbers and the new forecasts, Greece’s GDP in 2012 will reach 2003 levels (one caveat: the Greek Statistical Agency will also revise 2000 to 2005 numbers). In other words, Greece in 2012 will be exactly where it was in 2003 – effectively losing a decade’s worth of economic activity. 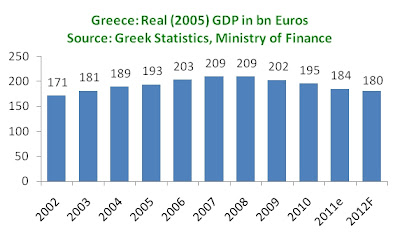 This fact is a painful reminder of the sacrifices made by the Greek people whose income will have declined by 14% during a five-year recession (if not longer). It also underscores that the Greek people are running out of patience – asking for more sacrifices during a prolonged recession becomes progressively harder as time goes by. The two questions that remain: can the government find ways to stimulate the economy (see here)? And more importantly, what comes at the end of this recession – will this has been an opportunity to pass serious reforms or will the “lost decade” be truly lost?
Posted by Nikos Tsafos