For a country whose pride is wounded by the economic crisis, there is immense satisfaction in one piece of data: that the average Greek person worked 2,109 hours in 2010 versus a German who worked only 1,419 (data from OECD, here). Doesn’t this prove that the stereotype of the lazy Greek is just that: a stereotype? Sadly, it does not. As always, reality is more complicated.

Could it be that this is what the OECD data is showing? To test this assumption, I tried to match hours worked per employee versus the prevalence of part-time employment (see here). I only looked at countries that had data for 2010 and I excluded non-European countries to control for cultural variety (this excludes, for example, Japan, Korea and the United States). The results, shown below, support the hypothesis: more hours worked tends to be correlated with less part time employment. If you have few part time workers, you work more hours on average. That is all the data is saying. 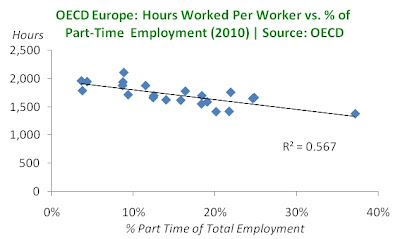 Of course, this only tells us how long people work – it does not tell us how hard they work, nor if they are productive. Just visit any government agency in Athens and you see people who are nominally “working” but are just chatting on Facebook or are painting their nails. Nor should we discount that longer hours are often the result of an incentive system that rewards overtime pay. The evidence supports this by the way: when it comes to productivity, Greece ranks 24th in the OECD (out of 34) for GDP per hour worked, bracketed by Portugal and Slovakia. In other words, Greeks create less GDP for each hour they work than every other EU-15 country besides Portugal. That’s a poor return on investment.

Does this mean that Greeks are lazy? Of course not. What the data shows is that Greece has a rigid labor market with fewer people who work part time. It also shows that even though Greeks work 20% more hours per employee than the OECD average, they produce 25% less for each hour they work. This is a productivity challenge that Greece will have to solve.

So there are indeed Greeks who are lazy. The problem is that they are richly rewarded by the hard workers. And that makes no sense.
Posted by Nikos Tsafos