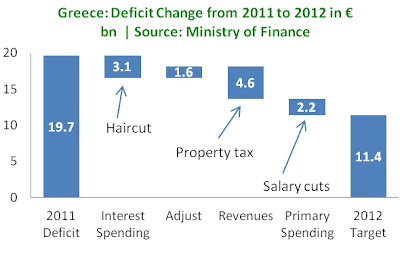 For 2011, the Ministry of Finance has projected a €19.6 bn budget deficit; the target for 2012 is to lower this deficit to $11.4 bn. First, the Greek government is negotiating a reduction in its private sector debt (see here); the Ministry of Finance estimates that this haircut will lower interest expenses by €3.1 bn. There is a also category labeled “adjustments” that will *increase* the deficit by €1.6 bn, thus offsetting some of the gains from the haircut. If we assume that these adjustment are a given, on a net basis, the Greek government is left with a need to raise revenues and/or cut spending by €6.7 bn (€8.2 – €3.1 + €1.6 = €6.7 bn).

Of that €6.7 bn, two thirds (€4.6 bn) will come from a revenue increase versus a third that will come spending cuts. On the revenue side, the increase comes from three sources: (a) a 29% rise in direct taxes from individuals; (b) a 217% increase in property taxes; (c) and a 24% reduction in tax returns. On the spending side, the two main sources of reduction come from (a) lower salaries and (b) the unhelpfully named “other spending.”

Let us focus a bit on the revenue side of the equation. In a shrinking economy (GDP is forecasted to fall by 2.8%) collecting more taxes will be a great challenge. What is more, the property tax remains hugely contentious and many people want to not pay it as a form of civil disobedience. As for the budgeted €3.8 bn in tax returns, this is exactly what the government budgeted for 2011 – except that the actual figure out turned out to be €5 bn, which the government attributes to one-off effects.

But if you step back and look at the revenue side more broadly, two figures stand out – both of which are included, by the way, in the budget document itself. The first is the ratio of direct taxes to GDP: since 2004, this number has averaged 9.1% and it has ranged from 8.9% of GDP to 9.5% of GDP. In 2012, the government expects this number to increase to 11.4% of GDP, a full two percentage points higher than at any point since 2004 (and much before that). 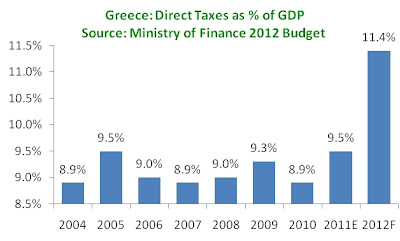 The second is tax buoyancy, which is effectively an elasticity which measures how much taxes increase relative to GDP. From 2004 to 2008, buoyancy averaged 1.14 which means a 1% increase in GDP led to a 1.14% increase in tax revenue. That makes sense. Then came 2009 where tax revenues fell at a much higher than GDP, followed by 2010, when buoyancy turned negative because tax revenues rose despite a contraction in the economy. By 2011, however, the relationship returned to a more normal 0.7. By contrast, the 2012 budget is forecasting a -3 buoyancy – which means that not only will tax revenues increase when GDP is shrinking but the tax elasticity will be twice as much as it was in 2010 when the government institute a myriad new tax measures. As I said, these two figures are generated using data directly from the budget – so there is no much ambiguity. 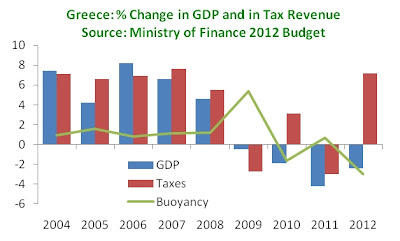 If there is one common theme in the literature of fiscal consolidation is that spending cuts work better than tax increases, a lesson that the Greek government seems progressively intent to ignore. In the case of Greece, of course, this ignorance has both economic ramifications (by deepening the recession) and political ramifications by signaling to the public that higher taxes will take precedent over cutting spending in the inefficient public sector. Neither of these two signals is positive.

When Greece first announced that it would reach an agreement to shave off some of its debt, I noted that the true implications of that decision would depend on what the government did with the reprieve it got: I wrote, “Ideally, the government can put this windfall to good use by providing some tax relief that can stimulate consumption and hence economic growth. Or, it can waste the chance by only relaxing its resolve to reform.” In truth, the government has wasted it by sticking by its plan to keep taxes high rather than cut spending more aggressively. And by signing a budget that tries to squeeze more revenue from an atrophying economy, it is laying the seeds of its own failure. What a shame.
Posted by Nikos Tsafos