The IMF has finally released its detailed assessment of the second Greek loan package. The program contains many positive elements, but its excessive emphasis on internal devaluation (lower wages) as the way to create growth makes the program a very tough sell from the beginning both politically as well as economically.
The Basics of the Program. Greece will receive €28 bn from the IMF disbursed in 17 installments of €1.65 bn each with the last payment made in February 29, 2016. The IMF loan will be repaid fully by 2026 (including full repayment of the first loan by 2016). The Euro Area Member States (EAMS) will provide €144.7 bn, of which €112.6 bn will be disbursed in 2012, €17.2 bn in 2013 and €14.9 bn in 2014. There is no provision to repay these loans before 2016. By 2014, the official sector will hold 69% of Greece’s public debt. In this scenario, there is minimal need for market access before 2016.

Main strategy. The program rests on three pillars: “(i) restore competitiveness and growth; (ii) restore fiscal sustainability; and (iii) secure financial stability.” The new program has an intense focus on internal devaluation; as the IMF notes, “resolving Greece’s balance of payments problem within the euro will require a shift in the structural reform strategy to directly prioritize internal devaluation.” The IMF writes further that, “the [revised] fiscal path accommodates the impact of deflationary labor market policies in 2012 by allowing a primary deficit of 1 percent of GDP (1¼ percent of GDP below the target established under the 5th Review under the [Stand-by Agreement]).” It does note, however, that it suggested a longer fiscal consolidation period than was finally agreed to.

What to make of this program? First, the program is a lot more realistic. It seems that the IMF has a much better grasp of Greek reality. By emphasizing administrative capacity and execution, it is recognizing that frustrating gap between government promises and reality. Second, the program is incredibly more generous – while the first package foresaw market access in less than two years, this program gives Greece over 4 years to return to the market (and realistically even more). The Fund loan will take a decade to repay, while the EAMS loans will likely take longer. Third, the official sector has effectively “nationalized” Greek debt, owning 69% of the outstanding debt by 2014, converting the unwinding of Greece’s debt into a much more political rather than market affair.

Will the program work? Certainly, the new agreement contains many worthwhile reforms, as did the first memorandum. But the excessive emphasis on internal devaluation strikes me as wrong. To understand why, let us first review the path that the IMF is forecasting for the Greek economy. 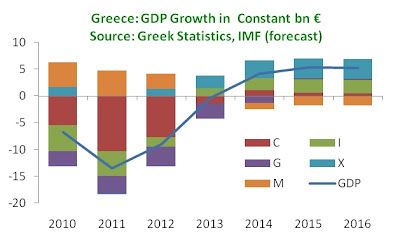 The IMF forecasts another big drop in private consumption in 2012 (-5.7%), followed by a smaller one in 2013 (-1.1%), after which there will be very modest growth. Second, it assumes a big resurgence in business investment: after a fifth successive annual contraction in 2012, investment will grow by 7.7% over the 2013-2016 period. Third, is assumes that exports will rise by 6% on average between 2012 and 2016. Basically, this is a scenario where internal devaluation continues to shrink disposable income, but leads eventually to competitiveness that generates growth through investment and exports.

The problem, of course, is that as the IMF admits, “Restoring competitiveness by way of internal devaluation has proved to be a difficult undertaking with very few successes.” In fact, Box 3, a two-page section in the IMF report devoted to “International Experience with Internal Devaluation” reads almost as a perfect refutation on the case for internal devaluation. And yet this is the pillar of the new program. This economic path prolongs the contraction in private consumption, making the program harder to defend politically. It also places a meager focus on shrinking the state: by 2016, primary government spending may be 14% below 2011 levels – but in absolute numbers, the decline over four years will be just as big as the decline achieved in 2010 alone. That’s too slow. Since the state is not shrinking, the economy cannot rely on tax relief and a consumption boost, thus having to rely on investment and exports to generate growth. Can investment and exports deliver?

The investment number is more defensible: on a real basis, investment in 2016 will be merely above 2010 levels and still 40% below the 2007 peak. The IMF thinks that cheap labor (via internal devaluation) will help fuel investment: “reforms to facilitate investment are being accelerated to allow firms to take advantage of cheaper labor once financing conditions stabilize.” But for investment to grow at 7% a year, reforms will have to be rapid and the business environment will have to improve dramatically, not just on paper but in reality as well.

The export boom is even harder to defend. From a modest decline in exports in 2012, the program forecasts 6% annual growth in exports to 2016. By contrast, the 2010 export boom resulted in 4.2% growth, while exports grew on average by 3.5% a year between 2001 and 2007. So 6% growth is a step-change whereby exports in 2016 will be 12% higher than their all-time high in 2008. The program does have some measures that will specifically support exports: “eliminating the obligation of registration with the exporters’ registry and establishing the framework for an e-customs system and electronic export window.”

In other words, there is considerable downside risk to this forecast. For example, if investment and exports grow at half the rates projected by the IMF in the period from 2013 to 2016, the average GDP growth rate in those years will be 1% a year versus the 2.8% growth envisioned by the IMF. So a lot hinges on this delivering this rapid growth in exports and in investment.

Final thoughts. In my mind, the program places too much emphasis on internal devaluation. In a sense, I understand the point of departure of the Fund: consumption levels in Greece are too high relative to its peers and investment is too low – a sustainable economic path would require less consumption and more investment. Plus, as the IMF writes, “Greece’ entry-level minimum wage is higher than in Portugal (by 50 percent), Spain (by 17 percent), and 5–7 times higher than in Romania and Bulgaria.”

But I also know that young Greeks who are employed in the private sector barely make ends meet, and certainly would not were it not for parental support either directly (cash) or indirectly (housing, cars, etc.). I know that a Greek consumer will hardly tolerate signing up for another four years of misery with no consumption growth and no tax relief. As a result, this program relies on overly ambitious targets for investment and for exports, while offering no relief to the Greek consumer who is burdened with excessive taxation to pay for a state whose size is declining very slowly. And that’s a tough sell.
Posted by Nikos Tsafos