The Greek Economy Remains in a Vicious Cycle

The Greek economy contracted by 6.9% in 2011 according to preliminary statistics by the Greek Statistical Agency, bringing the gross domestic product (GDP) down to almost 2003 levels. At the same time, the Greek Ministry of Finance has published its first estimates for the consolidated budget in 2011. According to the figures, the budget deficit actually rose in 2011 due to a slower decline in expenditures versus 2010 and a large decline in revenues. These numbers underscore the futile effort to draw more money from a contracting economy to pay for a state that is not shrinking quickly enough. 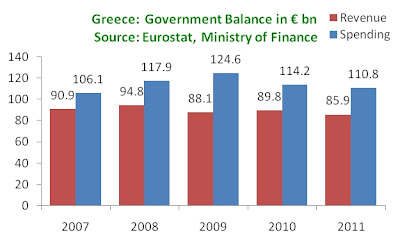 The effect of this consolidation has been to plunge the economy in a deeper recession. The economy contracted by 6.9% in 2011 (versus 3.5% in 2010 and 3.3% in 2009). Yet the composition of this recession has changed (see here). Throughout 2009 to 2011, there has been a steady reduction in imports (M), which acts as “growth” for GDP. Contrary to news reports which tout an export boom in the country, exports (X) contributed modestly to GDP in 2010 and they were flat in 2011. Investment (I) has been declining since 2008 – not only is investment now 50% down from its 2007 peak, but it has fallen below 2000 levels. Government expenditures (G, which only capture a share of total spending) also declined in 2010 and 2011. The big problem, however, is consumption, which fell by 7.1% and which was, by far, the biggest driver of the 2011 recession. 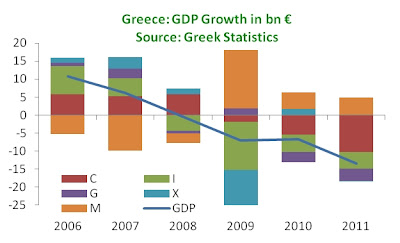 These numbers show that despite some progress in shrinking the state in 2010, government spending is not falling enough. Instead of making a more serious effort to roll back the state, the government is trying to increase revenues – but since it is unable to raise revenues by fighting tax evasion, it is doing so by raising taxes on everyone. This, in turn, is squeezing money from households (which can’t spend) and from companies (who can’t invest) causing an ever deepening recession.

To get out of this vicious cycle, Greece needs a more serious effort to cut government spending. If spending is lower, then the government can achieve its budget deficit targets with a lower level of taxation, meaning it can lower taxes on households and companies. Such tax relief is essential to reignite spending and resuscitate a moribund economy. Greece’s big state is literally squeezing the life out of the economy.
Posted by Nikos Tsafos