Unemployment During the Greek Economic Crisis from 2008 to 2011

In Q4 2011, there were 1,025,900 unemployed people according to the Greek Statistical Authority, as the unemployment rate reached 21%. Who are the unemployed and how has their composition changed in this crisis? 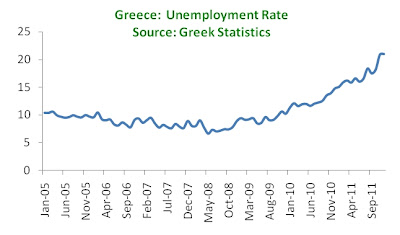 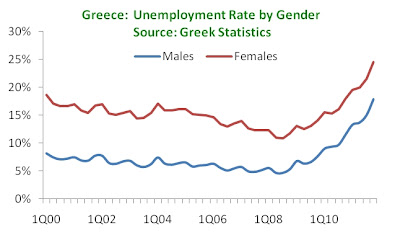 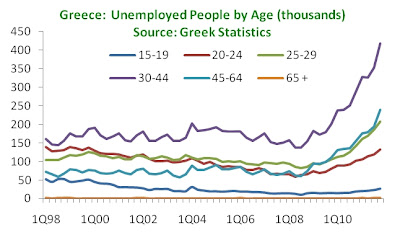 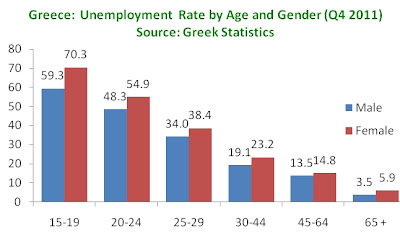 Education. Around 37% of the people who are unemployed are people whose education extends just to a high school diploma. This group also accounts for 38% of the growth in unemployment between the end of 2008 and the end of 2011. After people with only a secondary education, people with a vocational degree make up the second largest unemployed group, making up 20% of the total. 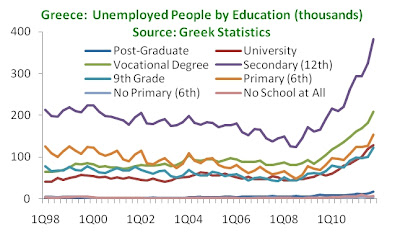 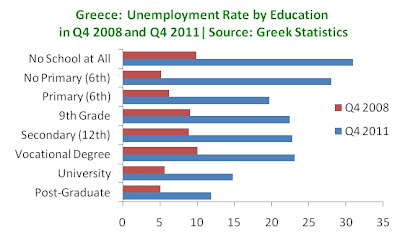 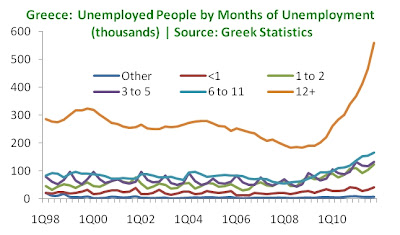 Sector. In the three years from Q4 2008 to Q4 2011, the Greek economy has shed 657,000 jobs. Three sectors which make up 34% of the country’s total employment (there are 21 sectors in total) accounted for 67% of the lost jobs, led by construction (160,000 jobs lost), manufacturing (146,000) and then wholesale and retail trade (111,000). There were also some sectors where employment actually grew, albeit modestly: “financial and insurance activities” and “human health and social work activities.”

Region. Of the people who are unemployed, 40% live in the Attica region (which includes Athens), a share that is slightly higher than its population (36%). Central Macedonia makes up another 18% of the total employed population, roughly on par with its 17% of the population. In terms of unemployment rates, the Peloponnese, Northern Aegean and Crete tend to (and continue to) rates below the national average, while Macedonia and Sterea Ellada are above the national average.

Labor Costs. The average monthly labor cost has been declining consistently since early 2010 at an average rate of 3.4% on a year-on-year basis. But in Q4 2011, there was a much more significant decline of 14.9% Relative to the peak, labor costs have come down by about 18%, thus correcting some of the competitiveness adjustment necessary to correct the imbalance that was created earlier in the decade. 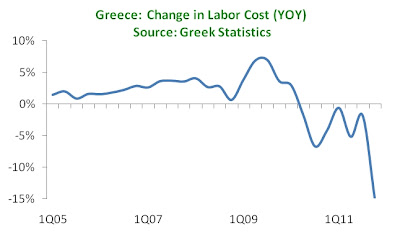 Overall profile. An unemployed person in Greece is as likely to be a man as a woman. There is a 41% chance that they are 30 to 44 years old, and there is a 37% change that they have only a high school diploma. They are 55% likely to have been unemployed for over a year, they are likely to have lost their jobs from construction, manufacturing or wholesale and retail trade, and they most likely live around the major urban centers in Athens or Thessaloniki. As for the people who are employed, their cost to employers has gone down by about 18% on average as a result of lower wages or lower indirect payments.
Posted by Nikos Tsafos