We often use the term “European Crisis,” but not every country in Europe is experiencing the crisis in the same way. In fact, there are several countries that are doing quite well. On a sub-national level, Eurostat reported that unemployment in 2011 ranged from 2.5% in Salzburg and Tirol in Austria to 30.4% in Andalucía in Spain. These three regions are occupying the same economic space only in a very abstract way.

Inspired by that report, I looked at a few more metrics (see table). Of the 502 million people who live in the European Union: 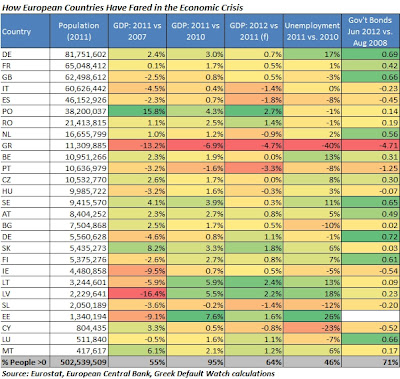 What do these numbers tell us?

First, they are a useful reminder that this is not a “European” crisis at least not in any meaningful sense since a lot of people live in countries that are doing well economically. Given the debate about whether this crisis is due to country-specific problems (corruption, red tape, state intervention, etc.) versus systemic flaws (common currency, European leadership, capitalism, etc.), such variance in outcomes means it is hard to put all the blame on systemic flaws alone.

Second, mobility of capital and of people is insufficient to level outcomes (of course mobility can only okay a role). Eurostat reported that, “In 2011, there were 48.9 million foreign-born people living in the EU27 Member States, with 16.5 million born in another Member State than the one in which they live (3.3% of the EU population) and 32.4 million born in a country outside the EU27 (6.4% of the EU population). In total, foreign-born people accounted for 9.7% of the total population of the EU27.” By contrast, in the United States, the foreign born population was 12.9% in 2010, and the share of people who lived in a state other than the one they were born was 27%. In other words, the “natives” made up 90.3% of each European country while they made up only 58.8% of each US state.

And third, the political economy of the EU remains precarious. For one, such a variance in experiences mocks the idea that this is in fact a “common union.” But more generally, it risks creating a greater backlash in the periphery. People often tell me that Germany does not want to solve this crisis because its economy benefits from it. I do not share that view, but I also recognize that as long as the European economy continues to operate in many tiers, such grumblings will only get louder. And over time, they can only cause harm to the union.
Posted by Nikos Tsafos