Should Greece Restructure and Privatize its Power Company?

The New Democracy-led coalition is gearing up for its first big fight against the labor union of the Public Power Corporation (PPC, or ΔΕΗ in Greek). This is good news because we will know soon whether the government has what it takes to implement reforms. Lose this battle, and it will lose the war. Yet amid the bullying and the threats, there is also a quasi-argument brewing: an argument that Greece’s low tariffs for electricity are proof enough that the system is not broken. Is that true?

PPC is right in a very narrow sense. In 2011, Greece’s residential tariffs were the fourth lowest in the European Union and 23% below the EU-27 average (excluding taxes). But that is not the whole story. The state regulates prices, so it’s not hard to mandate that prices remain low. Therefore, the price level itself is not a very useful guide. How should we, instead, think about prices?

First, retail tariffs have not increased according to fuel costs, as they should in a market system. As the International Energy Agency (IEA) notes in its 2011 Country Report on Greece: “The tariff system has caused several distortions in the electricity market. The average wholesale price of electricity tripled from 2004 to 2008, but the regulated end‐user tariffs were increased by only 40% for industrial users and by 25% for households.” 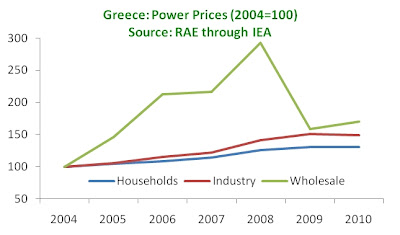 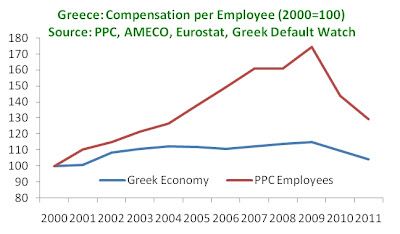 Fifth, the company overall is underperforming. Amazingly, the best benchmarking data to prove this point come from PPC itself. In 2007, return on equity was 1.1% versus 17.1% for the four largest European utilities. Return on capital employed was 2.1% versus 10.1% for six big European utilities. In a number of other metrics – return on sales and capital turnover – the company was lagging its peers. This is no wonder if power prices barely cover costs and staff costs have gone up when the number of employees has declined. 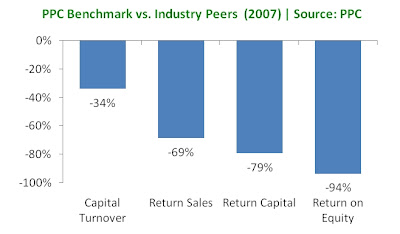 Sixth, it is not clear that the company’s trajectory is sustainable. At times, PPC is cash positive. But in part this is because it is depleting its coal mines – look at the finances of the coal mines by themselves, and they barely make money, which means that PPC is benefiting from investments in coal made a long time ago. But coal production peaked in 2002 and has declined by 21% since then. What is more, as the IEA noted, “In March 2008 … the EU Commission found that PPC’s right to privileged access to lignite violates EU competition rules.” Access to cheap coal is not a sustained competitive advantage.

Seventh and linked to the sixth, is the significant carbon intensity of the Greek economy which is due, in large part, to the heavy dependence on coal for power generation. Greece’s carbon intensity per unit of energy is 25% higher than the EU average. Besides the obvious implication for climate change, this also exposes Greece in general, and coal-fired generation in particular, to significant cash costs to buy emissions permits to keep polluting. As the IEA notes, “lignite‐fired power plants in Greece emitted an average of 1 tonne of CO2 per MWh generated in 2009, whereas the gas‐fired plants emitted 350 kg of CO2 per MWh.” This is again a looming cost for the Greek consumer. 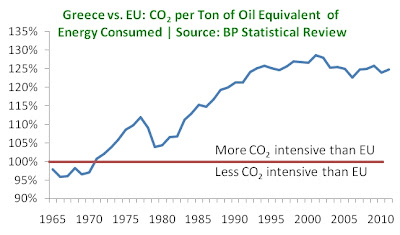 Eighth, PPC does not provide great service. The Council of European Energy Regulators (CEER) conducts a Benchmarking Report on the Quality of Electricity Supply. Its top measure of quality is “unplanned interruptions excluding exceptional events.” Greece had 134 minutes in 2009 (latest data available), putting it 6th from the bottom in a list of 19 countries. Only Portugal, among the EU-15, had a worse number. Relative to the best service (Germany), Greece had ten times more minutes interrupted. That’s not very good.

Ninth, PPC’s dominant position distorts the market for wholesale power and prevents any meaningful competition from emerging. So without a reform of PPC, the power market cannot be reformed in any meaningful and the new investment that the country needs to meet its power needs will always lag what would have been possible if PPC did not have a dominant role.

One of my earliest memories when I went to college in the United States was furiously unplugging my laptop when I heard thunderstorms outside. My roommate looked at me and was puzzled: “what are you doing?” I said I am protecting my computer because we will lose power.” He gave me a perplexed look. It turns out that this is not quite what happens in America.

Deregulating the power sector is a serious debate and one that requires a focus on getting regulation right and on ensuring that we do not replace a public monopoly with a private one. But PPC is intimately connected with lights going out during inclement weather and with the A/C doing down in the midst of the summer heat wave. Sometimes, this happens because the power company cannot do its job. But sometimes it happens because its bullies in the labor union want to send a message to the rest of us. They get paid too much money to be sending those messages and to be bullying anyone. It’s time to end this farce.
Posted by Nikos Tsafos