The Endless Tax Squeeze in Greece

My last post discussed how Greece’s “austerity” was not really austerity because first, much of the cut in spending came from lower investment and lower spending on weapons; second, that the cut in spending between 2009 and 2011 has been smaller than the increase in spending from 2006 to 2008; and third, that the state still spends more as a share of GDP than it did in 2000-2005. But since spending is not falling quickly enough, the state has to increase revenues to plug the hole in its budget deficit. This post reviews the main changes that have occurred on the revenue side of budget in recent years.
The first thing that is obvious from the graph is that revenues are not the main problem. I am not denying, of course, that tax evasion is pervasive in Greece; nor do I doubt that the state could collect a lot more in taxes if it functioned better. Rather, I mean that the changes in revenue cannot explain what has occurred recently to the Greek economy. 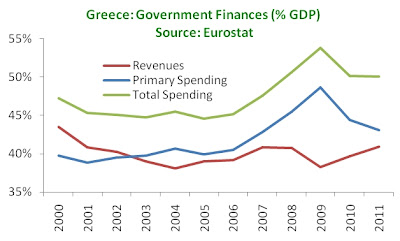 Government revenues as a share of GDP fell from a high of 43.5% in 2000 to 38.1% in 2004. In part, this drop was the result of the entry into the eurozone. Revenues in 2000 were at a historical high – at no other point in Greek history has the state collected as much money as it did in 2000. Once the country joined the eurozone, its focus and discipline on tax collection weakened. Soon thereafter tax reforms pushed revenues were back to their 1997 level, following an inverted U-path. In other words, it was the 2000 figure that was abnormal, not the drop to 2004. Effectively, the increase in revenues before 2000 was akin to a pre-wedding diet – it worked but it unraveled the day after. That is what happened to revenues in Greece.

From 2004 to 2007, revenues increased somewhat, peaking at 40.8% of GDP in 2007, before falling in 2008 due to the modest contraction in the economy. They then fell by a greater amount in 2009 due to a 3.3% recession and, at 38.2% of GDP, they were almost at the same level as their 2004 low point. But by 2009, the growth in spending had already put the budget completely out of balance – it was spending that was out of control, not revenues, which were at historical averages.

At that point, the state started to practice “austerity,” mostly by cutting spending (as economic practice recommends). But the state also tried to raise more revenue to close the huge fiscal hole with which it ended 2009. It did so mostly by increasing indirect taxes, thus offsetting the decline in revenues that are linked to work, income and profits. This tax hike pushed up prices and squeezed households. Something that cost €100 in 2008 would have cost €109 in 2011 – but in constant taxes, it would have cost €104, meaning that more than half of the increase in prices came from higher taxes. 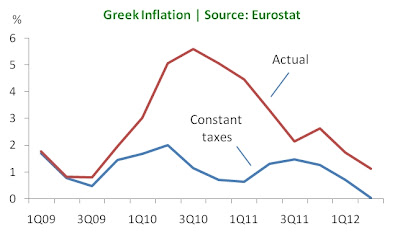 Besides value added taxes, the government also benefited from an influx of EU funding which rose from a low of €1.8 billion in 2009 to €3.6 billion in 2011. This inflow was, by far, the greatest addition to the Greek budget on the revenue side during this crisis. In fact, 11% of the fiscal adjustment (drop in deficit) between 2009 and 2011 came from higher EU finding for the public investment budget.

What does all this tell us? Greek revenues were a problem from 2000 to 2004 when the gains in tax revenues of the 1990s abated. Soon enough the state was collecting as much in revenue as it was in the late 1990s. Yet through 2006, the weakness in revenue was coupled with a relatively flat primary expenditure profile. It was at that point that spending started to increase and revenues followed suit only modestly in 2007. During the crisis, the government has been able to bring revenues back to their 2001 levels, in part due to higher EU funding and in part due to extraordinary taxation. But if one takes a decade-wide snapshot it is clear that Greece’s problem is that spending spiraled out of control, not that tax evasion became more pervasive or that revenues fell. It is thus on the expenditure side of the equation that the correction ought to focus.
Posted by Nikos Tsafos