A year ago, I wrote a post about the ten most surprising things that I had learned about Greece in the course of writing my blog. As I dug deeper into the country’s recent economic history while conducting research for my book on the Greek crisis, I came across a few more. Here are the things that most surprised me during that research (relying heavily on the OECD’s Economic Surveys of Greece dating to 1962).

Fact #2: Remittances beat tourism and shipping as a source of foreign exchange. The OECD notes that 1.25 million Greeks emigrated from 1950 to 1974. The money they sent back trumped tourism or shipping receipts as a source of foreign exchange through the late 1970s. For every dollar earned by remittances in 1960, shipping provided 74 cents and tourism 33 cents. In 1970, the gap was narrower for tourism (40 cents) but larger for shipping (68 cents). From 1970 to 1978 tourism and shipping grew faster than remittances, and so, by 1978, tourism brought in $1.12 and shipping $1.02 for every dollar of remittances.

Fact #3: Minimal foreign direct investment. From 1954 to 1976, foreign direct investment was ~$620 million in total – which was equal to the amount of remittances received by the country on an *annual* basis at that time. Modest FDI did not really start until 1976, and even since then, it averaged less than 1% of GDP a year (with a peak of 2% in 2% in 2006).

Fact #5: The importance of industry peaked in 1973. Greece is a service-based economy – in fact, services provide a greater fraction of GDP than in almost every other EU country. But this wasn’t always the case. Of course, services have always been important. But in the 1960s and 1970s, the relative decline of agriculture came together with a growth in industry. Then, industry peaked in 1973, and after some fluctuation, its share of GDP reached a second peak in 1979, at 31%. It then started to decline with few interruptions down to 18% in 2011. Since agriculture also fell, this meant that services, which made up ~56% in the 1960s and early 1970s progressively edged up to 78% in 2011. 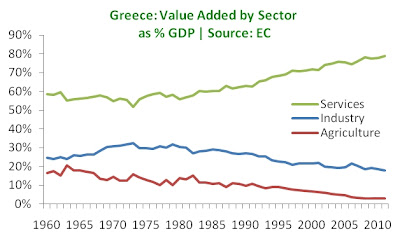 Fact #6: Tax evasion became a read headache towards the late 1970s. I was interested to see the point at which tax evasion shows up as a major problem in Greece. This graph is both imperfect and instructive: it shows the word count for “evasion” in each OECD survey of Greece since 1962. Until 1978, the word shows up sporadically. Then the 1979 survey mentions evasion as many times as all the previous 12 surveys combined. After a few quiet years (6 mentions per survey), its presence spikes to a new plateau of ~13 per survey from 1986 to 1996. At that point evasion shows up either a lot (~27 times) or a little (~7 times) before reaching a whole new level in 2009-2011 with an average of 42 mentions per survey. 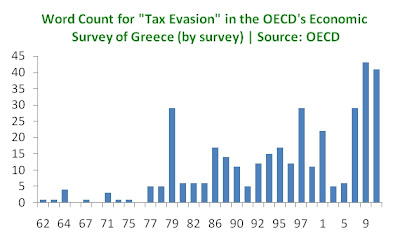 Fact #7: The bifurcation of the Greek economy. It is no secret that there are two very distinct, almost parallel economies in Greece. But the extreme divergence between the productive and the non-productive Greece still surprised me. From the 1993 OECD report: “Greek manufacturing industry is composed of two distinct sub-groups – dynamic private firms, with very high profit rates, and ailing (mainly state-controlled) firms, cumulating losses year after year.” By 1982, the losses of the loss-making firms exceeded the profits of the profitable firms and the overall profit rate turned negative through 1986. Yet throughout the 1980s, anywhere from 55% to 74% of the country’s 3,000+ firms were profitable and their return on equity was very high (20%).

Fact #8: Greece is a deep rentier economy. In an April 2011 post, I noted that Greece could be understood as a rentier state where work and reward were becoming disconnected. Mostly, I had in mind state spending for public employment and benefits. But delving more into the history of the Greek economy, I saw that the extent of rentierism was much deeper: large EU transfers in the 1980s and 1990s; sizeable remittances especially until the mid 1980s; and the massive boom in construction that created a pure “rentier” class, where rents form a household’s largest source of income (~10% of tax returns in recent years). So much revenue unlinked to work and effort.

Fact #9: The Olympics cost too little to explain Greece’s debt. The 2004 Athens Olympic Games cost around €8.954 billion, not including spending on projects that were going to happen anyway but that were accelerated for the Olympics. This is paltry compared to Greece’s debt of €298 billion at year-end 2009. Maybe the Olympics were a luxury that Greece could not afford – but they are not a cause of the current crisis.

Fact #10: For 25 years, Greece’s growth was the second highest in the OECD. In the past, I had written that Greece’s economy was vibrant not too long ago; yet this comment from the 1992 OECD report still surprised me; referring to the impact of the 1980s, the OECD noted: “after having recorded the highest GNP growth rate, next to Japan, in the OECD for about 25 years, Greece fell to the bottom place at the beginning of the 1980s and has remained there since. At the same time, the public sector debt reached one of the highest levels in the OECD area (113 per cent of GDP), representing a heavy burden for the economy in the future.”
Posted by Nikos Tsafos