Part one of a series on transport in Greece. The Company of Thermal Buses (ΕΘΕΛ) has since acquired the trolley company of Athens and Piraeus to form a new venture—it no longer exists in this form. Even so, some statistics on its activities are instructive. The table below gives the basic numbers (data from ELSTAT, Statistical Yearbook of Greece 2009-2010, 409, here). 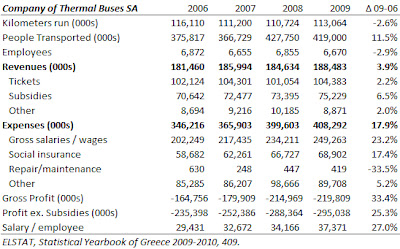 From 2006 to 2009, the company’s output (kilometers run) was flat but it transported 11.5% more people with the same volume of kilometers. In other words, its buses were fuller.

Revenues increased by 3.9%. “Subsidies or grants from the Public Sector or the European Union” make up 40% of total revenues, so it is good to look also at revenues from tickets and other activities (including “advertising, ticket fines, insurance indemnities, etc.”), which increased by 2.2%.

So this company carried 11.5% more people but its revenues rose by 2.2%. Receipts per person carried fell by 8.3%.

Expenses increased by 18% in 2006—2009. Gross salaries and social insurance contributions rose by 23.2% and 17.4%, respectively (+22% combined). Other expenses showed a modest increase, while spending on repairs and maintenance declined.

Excluding subsidies, losses increased by 25% in three years, an additional €60 million, to reach €295 million (2010 losses were €360 million according to the Ministry of Finance). In 2009, revenues from tickets and other activities covered 45% of the spending on salaries and wages, and they covered 28% of all expenditures.

To sum: This company transported 11.5% more people from 2006 to 2009, but revenues increased by just 2.2%, so revenue per passenger shrank by 8%. Staff declined by 3%, but costs for salaries and social contributions rose by 22%, salaries per person increased by 27%, and losses increased by 25%.
Posted by Nikos Tsafos