Part three of a series on transportation in Greece. Hellenic Railways Organization (OSE) runs the country’s railway system (passenger and freight) and operates bus routes overseas. OSE was re-structured in 2006—2007, so the data stop at different points (data from ELSTAT, Statistical Yearbook of Greece, various editions, here). OSE is one of Greece’s longest standing and most loss-making companies, so in contrast to my other posts, this one goes back in time. 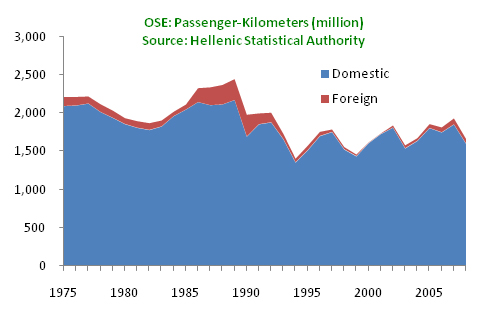 Cargo transportation shows similar variability: in 2008, OSE transported 16% fewer freight ton-kilometers than in 1975. Cargo transportation can be similarly divided in three periods: (a) from 1975 to 1994, a steady decline with occasional (1982—84 and 1986—89) spikes; (b) from 1994 to 2002, a period of relative stability; and (c) a period of relative boom. From the composition of traffic, it is clear that the decline was driven as much by domestic as by foreign transport, but the recent spike has been driven by foreign deliveries (OSE credits Bulgaria’s entry into the EU as adding to cargo transport). 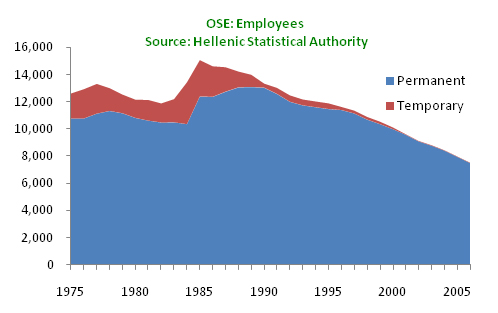 OSE’s revenues from passengers and from cargo have covered a progressively smaller share of its total expenses. In 1975, the company’s revenues from operations covered around two-thirds of expenditures. Over time, this share declined steadily until it reached ~11% in 1997. It has since declined by a smaller share. By 2010, the company was losing about €800 million a year, and it depended on state financing or state-guaranteed loans to keep operating. Its cumulative liabilities were roughly €8 billion (from OSE’s financial accounts, here). 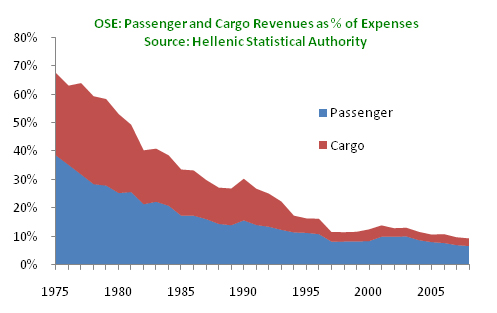 To sum: OSE has transported fewer people and fewer goods over time, and, despite a recent rise in cargo transportation, the company carried fewer people and goods than it did in 1975. Its personnel registered a sharp uptick in 1982—1985 (+27%), and it has since been declining at a slow but steady pace. The decline in staff, however, has not prevented the company’s deteriorating financial position: in the late 2000s, revenues from passengers and cargo covered only a tenth of total expenditures, down from two-thirds in 1975. As a result, the company has needed more cash from the treasury, its losses amounted to €800 million in 2010, and its debt was around €8 billion.
Posted by Nikos Tsafos