ELSTAT’s national accounts data show that Greece has, in fact, experienced an export boom. Exports of goods and services, which contracted sharply in 2009, have risen every year since then. Within a three-year period, exports have grown by €7.8 billion, or 17.5%, an impressive performance. Yet on a real basis, exports in 2012 were a mere 3% higher than in 2009, meaning the “export boom” is, in fact, mostly a matter of inflation. What is worse, exports on a real basis declined in 2012. 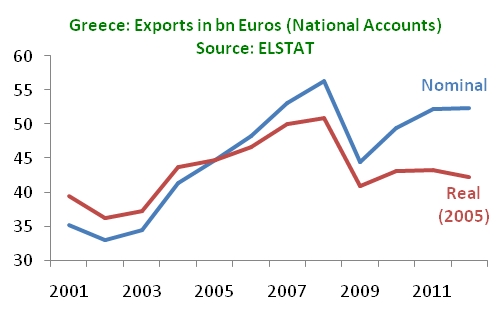 The data from the Bank of Greece paint a similar picture, albeit with more granularity. Services, which have historically made up 2/3 of exports, have performed poorly in recent years—in part due to tourism (see here) and in part due to shipping. Goods, by contrast, have shown a clearer upward trend, rising at an average 13% a year. In other words, the growth in nominal exports is really the result of higher exports of goods. 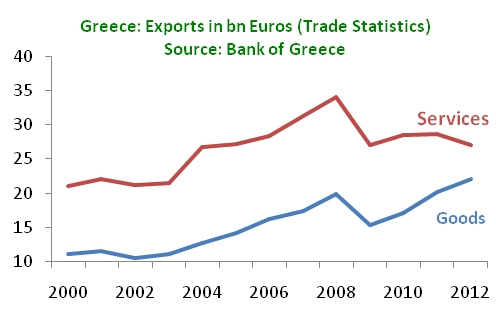 On closer inspection, however, this growth is somewhat spurious. Of the €6.7 billion increase from 2009 to 2012, almost 2/3 comes from higher oil exports. The rest (€2.3 billion) are the result of other, non-oil exported goods. 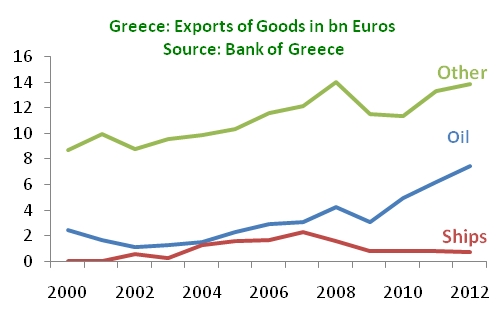 In principle, there is nothing wrong with oil exports, of course, expect that oil (product) exports are made possible only after (crude) oil is imported and refined. As a result, there is a limit to how much economic growth oil exports can generate. The oil balance (imports minus exports) is still negative by €10.2 billion. More importantly, the growth in exports is almost exclusively the byproduct of weak domestic demand: in 2008—2012, domestic demand fell by 122 kb/d, while exports grew by 112 kb/d. 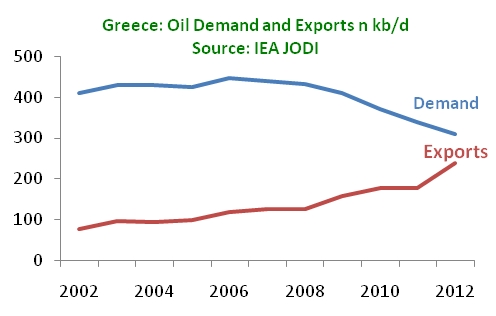 To summarize. On a national accounts basis, exports have grown since their 2009 low point, but were flat on a nominal basis in 2012. Taking into account inflation, however, exports have not grown at all since 2009. Services, which tend to dominate the export basket, have performed poorly since 2009; goods, by contrast, have shown a steady boom. Yet within that goods growth story, 2/3 can be attributed to growing exports of oil product, which are merely the result of weak domestic demand. If there is an increasingly competitive Greece which is exporting more to the world, the data is hardly picking this up.
Posted by Nikos Tsafos