Since 2010, Greece’s overriding objective has been to shrink its budget deficit. Much is made of the fact that Greece will soon have a primary surplus—meaning that excluding interest payments, the government’s revenues will exceed spending. A closer look at the country's finances, however, paints a less optimistic picture (data from here). And more worryingly, the retrenchment of state is moving very, very slowly.

Revenues. In 2012, government revenues reached a six-year low: at €86.6 billion, the country took in less money than at any point since 2007. On a real basis (controlling for inflation), the picture is even bleaker as 2012 marked a ten-year low, meaning that in 2003, the country collected more revenue on a real basis than in 2012. However since the economy has been contracting rapidly (20% real decline since 2008), revenues as a share of GDP reached an all-time high (44.7% of GDP). As a share of national income, the Greek state has never collected more money than it did in 2012. In effect, higher taxes are preventing revenues from falling in line with GDP—hence the record level of revenues in 2012. 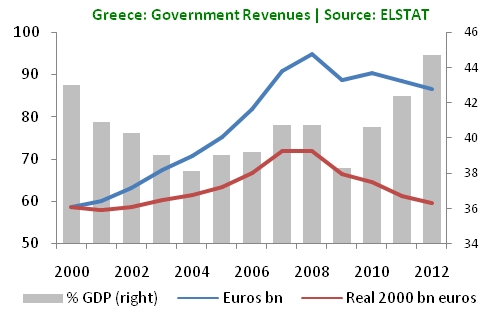 Total expenditures. Government spending has showed a similar pattern. On a nominal basis, spending is at a five-year low; on a real basis, it is roughly at the same rate than in 2003—2004. And just as in revenues, total government spending as a share of GDP reached an all-time high in 2012 at 54.8%. At no point in Greek history has the state spent more money as in 2012. Why is that? 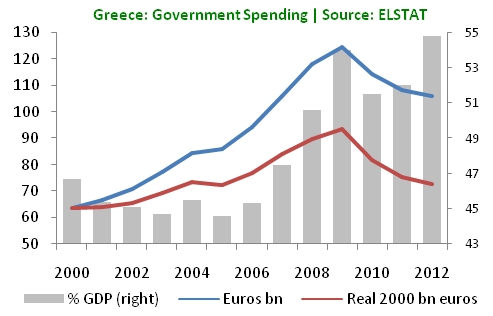 Primary expenditures. What if we exclude interest payments? In that case, 2012 is no longer a low point since primary spending increased in 2012 versus 2011. On a real basis, primary spending was at the same rate as it was in 2005—2006; as a share of national income, primary spending was still an all-time high in 2012. The high level of spending, in other words, has nothing to do with interest rates. 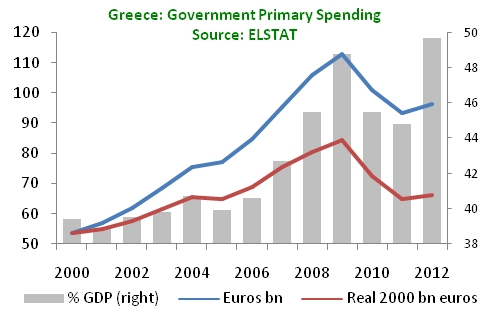 Primary spending is the sum of six components: wages, social benefits, goods and services, subsidies, current transfers and capital transfers. Let us examine each in detail. 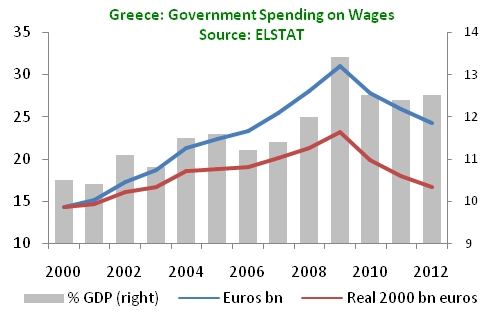 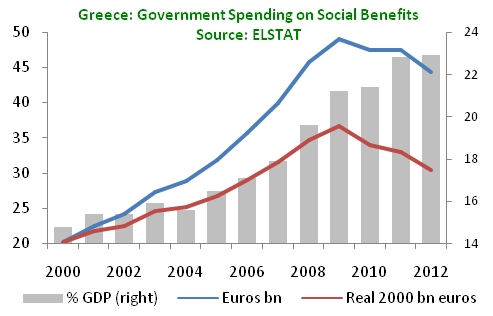 Goods and services (9.8% of primary spending in 2012). This is the part of the budget that has shown the greatest drop—50% on a real basis since 2009. However, this includes a nearly €2 billion drop in spending on weapons systems, accounting alone for 22% of the drop between 2009 and 2012. 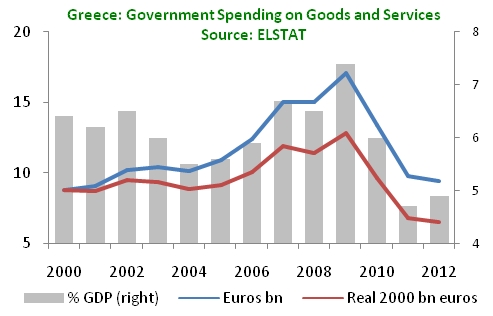 Other items (19% of primary spending in 2012). Of the remaining pieces, capital transfers form the most significant portion—they are also the component that rose most significantly in 2012 from €6.7 billion to over €15 billion—presumably, this includes the recapitalization of the Greek banking system.

Based on data from ELSTAT, Greece’s budget deficit actually rose in 2012. The Ministry of Finance, in its consolidated accounts showed a deficit of 6.6% of GDP—although the figure for the “Net incurrence of liabilities” puts a figure closer to that of ELSTAT. But what do these numbers tell us?

They tell us that the state is alive and well in Greece. Government spending—even excluding interest and capital transfers—was near an all-time high in 2012. Spending on wages and social benefits remains at very high levels—both in absolute terms and relative to national income. Meanwhile, the tax squeeze is pushing revenues to all-time highs despite a sharp contraction in economic activity. The tax payer is thus called to pay for wages and social benefits which persist at either all-time highs (social benefits) or near them (wages). So yes, Greece may soon get to a primary surplus, but without a serious curtailment of state spending—of which the 2013 budget targets—the primary will not do much good.
Posted by Nikos Tsafos