Every year, I write an article about how tourism has once again failed the Greek economy (see here, here, and here). Alas, 2012, was no different—with one exception. 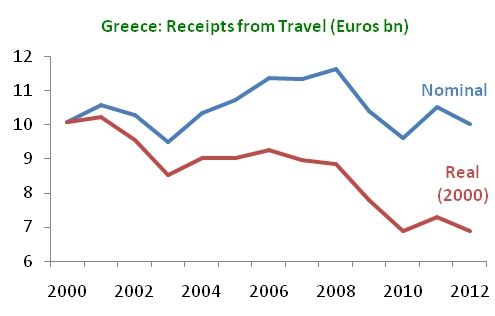 In general, Greece’s problem has never been attracting tourists—the number of tourists visiting Greece has been one of the few positives in a story of negatives (although Greece’s market share is declining, meaning that Greece’s growth is failing to keep pace with the broader market). Rather, Greece’s deeper, structural deficiency has been value extraction: tourists tend to spend less and less time in Greece and they also spend less and less money per night. That explains why, for example, receipts from tourism in 2012 were 6.6% below their 2005 levels even though the number of tourists was 7.8% higher.

Yet 2012 marked a slight departure from these broad trends. Last year, Greece’s chief problem was tourist attraction as the country received 910,000 fewer tourists than in 2011, a 5.5% decline that was roughly in line with the 4.6% reduction in revenues. Tourists from France, Germany, the United States and Belgium registered steep declines; those from Russia, the United Kingdom and Albania were the only bright spots in terms of higher arrivals.

There is one piece of news that was heartening, however: spending per night increased for the second year in a row from €69.6/night to €71.1/night. In fact, this was only the second year since 2005 that the increase in spending outpaced the increase in inflation—where, in effect, the real income that a tourist brought to Greece rose (this is the last line in the table).

It is hard to overstate the importance of this trend. If, in 2012, Greece had been able to get out of a tourist the same amount of money per night, in real terms, than in 2005, the country’s tourism receipts would have been 20% higher in 2012. Another way to look at it is this: the fact that a tourist spent only €71.1/night, versus the €69.7/night in 2005, carried an opportunity cost of €2 billion.

This is why value extraction is so important. Tourists spent less time in Greece (9.08 nights versus 10.66 nights in 2005) and they spend less each night they stay in the country. Therefore, even though Greece is able to attract more tourists, it cannot generate more money. Thankfully, 2012 included some positive data points in that regard as spending per night rose for the second year in a row. There is still a long way to go, but it’s a good trend.
Posted by Nikos Tsafos