It has been almost three years since the Greek government signed up to receive €110 billion from the Europeans and the IMF. This post is about the flow of funds in that period—how much money has flowed from what source and to what end (see also this post).

To examine the finances of the bailout, one has to look at the government’s budget and its broader financing needs (such are repaying debt, recapitalizing banks, etc). Let us begin with the first item (data from ELSTAT, here, p. 23). 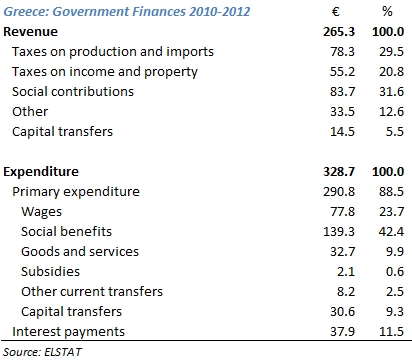 The first line of the chart says that the Greek government received €265.3 billion in the period from 2010 to 2012. Of that, social contributions made up the largest portion, 31.6%, followed by taxes on production and imports (including VAT), which amounted to 29.5%. Taxes on income and property added less than 21%. The rest came from capital transfers (such as EU funding) and other sources.

In that same period, Greece spent €328.7 billion, of which €290.8 billion was for actual expenses, excluding interest on debt. This is an important observation. It means that even if Greece had completely repudiated its debt on January 1, 2010, it would still have been short by €25.5 billion (€290.8 minus €265.3). Together with the €37.9 billion in interest payment, the total deficit is €63.4 billion. This is the amount of money that the Greek state needed in order to cover its expenses and pay interest on debt.

Looking at spending more specifically, all the taxes on production and imports just barely covered the bill for public sector employees (wages). Social contributions, at €83.7 billion on revenue side, covered just 60% of the total “social benefits” bill (pensions, health care, etc.). If one added all the taxes on income and property (€83.7 billion + €55.2 billion), the state could cover social benefits in full (€139.3 billion). In other words, all the taxes and social contributions that the state collected went exclusively to pay for the wages of the public sector and for social benefits—nothing more (such as buying goods and services, investing, etc.)

Goods and services (€32.7 billion) was more or less balanced by “other” revenues (€33.5 billion), while capital revenues (such as revenues from public investment and from EU funding) covered only half of capital expenditures. Collectively, all the other pieces were short €26.5 billion—this excludes taxes and social contributions on the revenue side, and wages and social benefits on the expenditure side.

This is one part of the equation. The second part is the enlarged financing needs of the state which are:

Total financing needs =
+ Covering that overall deficit of €63.4 billion
+ repaying debt that was maturing in 2010—2012 (before the restructuring)
+ other expenses such as recapitalizing banks, buying back debt as part of the PSI 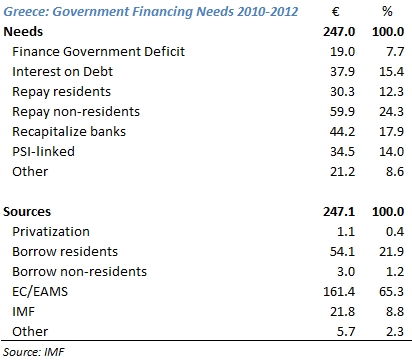 The Greek government needed €247 billion in the period from 2010—2012. Of that, a mere 7.7% went to finance the government’s deficit—the rest went for other purposes. Around 15.4% went to pay interest on debt—this money went to both domestic and foreign investors. Another 12.3% went to repay Greek investors who held government bonds that were expiring in that period. A full 24.3%, the largest item, went to repay foreign holders of Greek government bonds—in sum, almost €60 billion. Around 18% went to recapitalize banks, 14% went to support the PSI (such as buying back debt) and 8.6% went for other operations.

In other words, more than 50% of the money that Greece needed in that period was to deal with the country’s excessive debt burden (interest on debt and repaying residents and non-residents). Given that the bank recapitalization and PSI were both, ultimately, linked to the country’s debt, almost 84%, or €206 billion, was ultimately devoted to Greece’s debt—which, at year-end 2009, was €299 billion. Importantly, however, a large sum (€60 billion) went to bailout foreign banks and other investors. So this operation was minimally about covering the current profligacy of the Greek state—it was mostly about covering its pass excesses.

Where did Greece find that €247 billion (the totals do not add up due to rounding, so this number shows up as €247.1 billion)? Domestic residents (chiefly banks, insurance companies and the like) provided 54.1 billion (21.9%) of that funding. Privatization receipts covered another 0.4% and borrowing from foreign (private) investors contributed 1.2%. In sum, The Greek state was thus able to borrow money from either its own residents or from foreign investors to cover 23.6% of its financing needs—which would have sufficed to cover the government’s budget deficit and repay residents who held Greek debt (in effect, banks lent money to the government so that the government could repay its debts—so banks were rolling over the debt of the government). In fairness, however, some of this bank lending was only made possible because Greek banks could, in turn, borrow from the European Central Bank.

The rest of the funding came from the Europeans (65.3%) and the IMF (8.8%). It is interesting here to note how disproportionate the funding has been between the two sources—much as the troika is often equated with the IMF, the IMF has been a very marginal contributor to this whole package money wise. It is also interesting to note the connection between foreign the inflow of funds versus outflow of funds. Foreign creditors received back €59.9 billion in maturing debt and they received a (likely) majority of the €37.9 billion spent on interest. In all, therefore, almost half the funds provided by the European government governments went back to pay foreign (largely European) investors.

In sum, all the taxes and social contributions that the state collected merely sufficed to cover the state’s wages and social benefits. The rest of the balance left a deficit of about €26 billion. More or less, this is what Greece needed to keep running. However, the Greek state borrowed a cumulative €247 billion instead—most of this went to deal with the country’s past excesses and exorbitant debt. Of that flow of funds, the largest recipients were foreign investors, who received about half the money that (usually) their own governments lent to Greece.
Posted by Nikos Tsafos